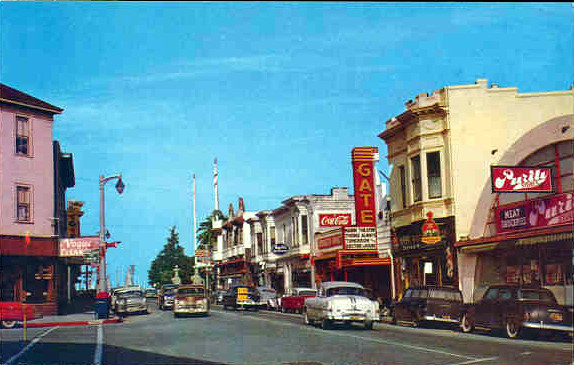 The Princess Theater was opened on May 28, 1915, located on Water Street, (today renamed Bridgeway). It was renamed Gate Theater in the 1930’s. It was taken over by the Blumenfeld Theater Circuit in 1953. Closed as a movie theatre by the 1960’s, it was used for stage productions for several years.

I purchased a postcard with a shot of the marquee in it. The façade reads “Gate”, but the marquee reads “Marin Theater…"To Hell and Back” with Audie Murphy" which would put the shot around 1955 if it was the initial release.

The former theater now serves as an art gallery.

I found additional Boxoffice references to the Gate Theatre, as well as a few non-Boxoffice mentions. The July 17, 1954, issue repeated that the Gate had been closed, and said that plans for its modernization had been discarded.

Then in the issue of December 4, 1961, there was an item saying that Diane Varsi, retired from her Hollywood film career, was making her theatrical debut and directing two short plays at the Sausalito Gate Theatre.

The Gate was apparently a playhouse for several years. I found a reference to the San Francisco Mime Troupe performing a Brecht play at the Gate in 1965, and one about actor George Ede playing Antonio in a production of “The Merchant of Venice” at the Gate in 1964.

Something’s a little wrong with the 668 Bridgeway address. In the 1948 movie, “Impact” there’s a scene filmed further up Bridgeway, where the square borders it. The Gate Theater is clearly visible in the background, on the left side of the street. I think the theater stood where the oddly shaped modern building is now, the last building on the left, at the t-bone intersection of Bridgeway and Princess. The building I’m referring to is occupied by the store, “Jewelry by the Bay”.

I adjusted the Google Street View of what the then Gate Theater is now for you. I went to The Gate Theater when I was kid. We lived in Sausalito. It was really cool inside. It was a small Movie Theater, but it had a lot of cute features.

I have to admit that I was very wrong when I posted my previous comment. The “modern building” I referred to has been there since the late 30s, and the Gate theater was actually in the very old building to the left of it.

Here’s an Article about The Gate Theater from the Website “Our Sausalito”: The Gate Theatre — Located at 668 Bridgeway in Sausalito in a spot now occupied by an art gallery, this movie theatre was built as the Princess Theatre (being near Princess St.) and was renamed the Gate in honor of the new Golden Gate Bridge in the 1930’s. By 1953 it had come under the control of the Blumenfeld family, who over time acquired most of the movie houses in the County. As television sets became standard features of American homes movie attendance dropped and The Gate was closed in favor of the nearby Marin Theatre (now Cinearts at Marin, a modernized three-screen facility), also then owned by the Blumenfelds. Some stage productions were still held at The Gate through the mid-60’s, and the San Francisco Mime Troupe called the place home in 1965. The Grateful Dead played there at least once in the mid-1960’s.

The October 16, 1915, issue of the Sausalito News listed the upcoming movies at the Princess Theatre:

The Gate Theatre is seen in the distance briefly towards the beginning of “Impact” (1948).

According to an article by the Sausalito Historical Society the opening date was May 28, 1915. At that time Bridgeway was known as Water Street. Presumably the street number would have been different. When it opened it featured electrically run projectors while the competing Swastika had hand driven ones.