Stanley Center for the Arts

Stanley Center for the Arts (Official) 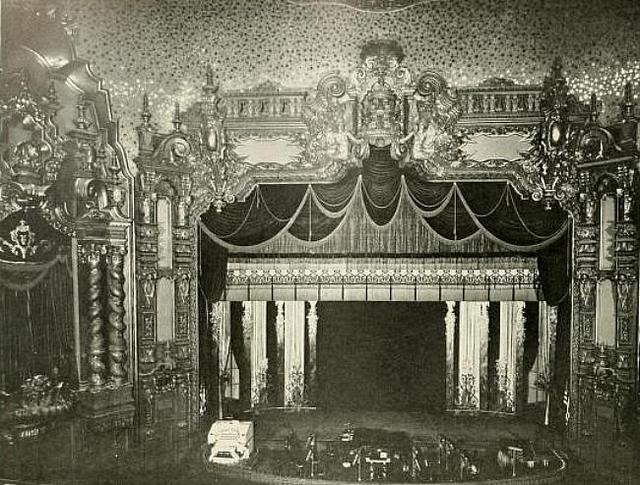 Built for the Mastbaum chain and opened on September 10, 1928, the Stanley Theatre is named for one of the Mastbaum brothers. It was designed by the famed theater architect Thomas Lamb and was called by a contemporary Mexican Baroque style. However, it is in reality a mish-mash of various theater styles popular in the 1920’s, including Spanish Baroque, Indian, Middle Eastern and even a touch of Art Deco style. The opening program featured the silent movie “Ramona” starring Dolores del Rio.

The decor is incredibly lavish, including gilded cherubs peeking out from around the organ grills, marble Renaissance lions in the lobby, the Baroque-Moorish twisted gold columns on either side of the stage and twinkling stars in the pink-hued sky high above the auditorium seats. One of the highlights of the Stanley Theatre is a grand staircase in the main lobby which was based upon one that was on the ocean liners the Titanic and its twin, the Olympic.

The Stanley Theatre was originally owned by the Stanley-Mark Strand Corporation chain, and was affiliated to the Warner Bros. By 1941 it was operated by Warner Bros. Circuit Management Corp. It remained Utica’s grandest and most popular movie house from its opening until the 1950’s, and by the late-1960’s, it was on its last legs. It closed in the early-1970’s.

Then in 1974, the Central New York Community Arts Council purchased the Stanley Theatre. It has since spent over $4.5 million in restoring the grand house to its 1920’s appearance, including seats, carpeting and paint schemes that duplicate the originals, as well as brand new electrical, mechanical, and safety equipment. Restoration is ongoing at the Stanley Theatre.

The Stanley Theatre became known as the Stanley Performing Arts Center, but reverted to its original name in 2005. The theater is home to a handful of organizations, including the Broadway Theatre League (which brings in touring Broadway shows), the Munson-Williams-Proctor Institute Great Artists Series which features operatic performances, and the Mohawk Valley Ballet. It is now known as the Stanley Center for the Arts.

ziggy: Your recent post brought a smile to my face! Thanks. I live in western NYS and to anyone from the Big Apple they consider this area as Upstate, too. I have never been to the Stanley, but hope to someday as I know it would be well worth the trip. As you probably know, the grand staircase in the lobby is designed like the Titanic grand staircase. And if you friend is from TN he should be very familiar with the Kennessee Theatre in Knoxville. Go to that link and CT member, Lost Memory recently posted a wonderful exterior photo showing the front doors and the marquee.

A 1986 view of the Stanley Theatre in Utica here and here.

The Stanley just underwent a $20.5M expansion … including restoration of the facade and marquee, all new stage house and support wing, and additional public space with elevator.

View the Stanley website for construction photos and calendars for coming events: www.StanleyTheatre.net

I’ve visited this theatre, and the people in charge seem to be doing a great job. I just wish that the marquee had been left red instead of being repainted black. It has a very deadening effect on what is otherwise a lively facade, and doesn’t look original. However, if that’s the biggest flaw with the restoration I’ll be the first one to stand up and cheer.

As part of the restoration of the facade and marquee, the original green paint color of the marquee was restored (similar to the color in the postcard at the top of this page).

In doing the work on the marquee— on the front, the WB circle was also found and put back on the front of the marquee .. the Stanley was a Warner Bros. theatre from about 9/14/08 ‘til it became a Stanley Warner Theatre later on.

That is a VERY RECENT PHOTO. THANK YOU!!!!

Wait ‘til you see the chandelier inside, and the beautiful new stagehouse and loading dock.

Mr G Waterman, from the posts above, come and take a look!
The loading dock is a thing of beauty.

I have the original opening article and ad for this theatre and it states that there were 3500 seats, unless they padded the facts.
Who knows for sure?

What a beautiful theatre!