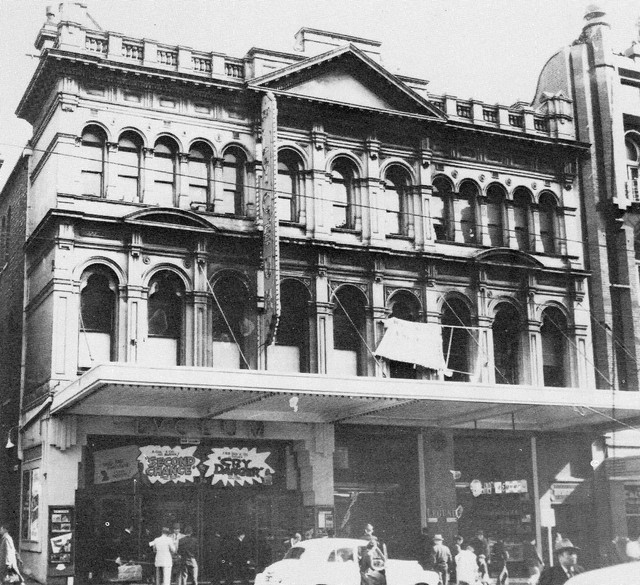 The decoration in this theatre was Edwardian when the Paramount Theatre opened on 27th December 1915 with Mary Pickford in “Rags”. It was a conversion of an existing building. In 1921 alterations were carried out to the plans of architects H. Gibb & Finlay which added a further 400 seats to the theatre by converted a former warehouse at the back of the stage. The theatre changed it’s name to Hoyts Lyceum Theatre in 1932. The style remained until 1963 when the walls were covered by curtains, which also included the foyers. It became the Cleopatra Theatre for the film of the same name when it opened here in February 1964. When the run of “Cleopatra” ended in 1965, it was re-named Paris Theatre and “The Sound of Music” played to packed houses. It closed in January 1970 and was demolished a short time later.

The seating capacity listed was from 1950.

It’s interesting about the theatre being named “The Cleopatra” for the run of the film. I wonder if any other theatre named themselve for the film?

Actually,RobertR,there was another theatre here in Melbourne which when it first opened in December 1964 was called the My Fair Lady theatre for the screening of that film and then changed it’s name to the Palladium Theatre.These are the only two examples that I know of,but there were probably others.

Naming these two cinemas “Cleopatra” and “My Fair Lady” was a loop-hole around (then) Melbourne City Council by-law that banned film advertising to be displayed above the awning of a cinema. Accordingly, both films were then able to be promoted with huge back-lit and neon flashing displays across the facade of the buildings, all in the guise of the theatre’s “name”.