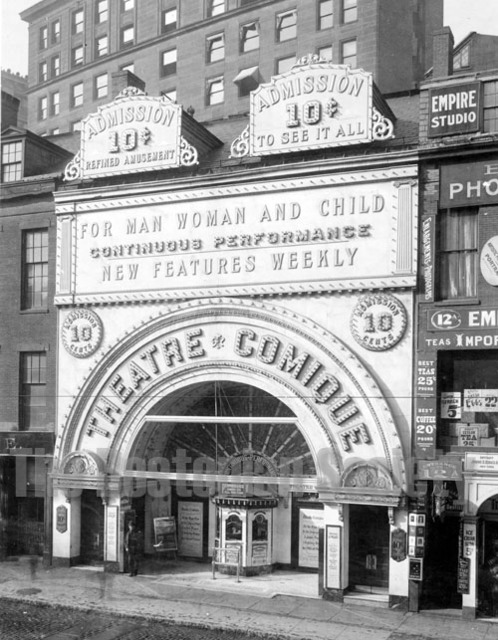 The Theatre Comique in Scollay Square opened in 1906 as the first theatre in Boston built specifically to show films. Admission was 10 cents. A typical program lasted a half hour, and consisted of a movie and several “illustrated songs”, precursors to the “follow the bouncing ball” singalongs of later years.

A photograph of the theatre shows signs reading

FOR MAN WOMAN AND CHILD

TO SEE IT ALL

I don’t know how long the Theatre Comique survived, either as an operating theatre or as a building. The entire Scollay Square district, including all of its stage and movie theatres, was demolished in the early-1960’s to make way for Boston’s Government Center.

According to Donald C. King’s new book The Theatres of Boston: A Stage and Screen History, the Comique opened on September 3, 1906, advertising The World in Motion, motion pictures and illustrated songs, for ten cents. It operated from 9 am to 11:30 pm.

It was opened by Joe and Max Mark as Boston’s first theatre devoted exclusively to motion pictures. It was located at 14 Tremont Row in Scollay Square. King does not say when it closed.

Looking at photos of that block taken in the 1930s reveals no trace of the Comique, but no evidence of demolition, either. It appears that the cinema may have been created in an existing building, which, after the cinema closed, reverted back to its former self.

In his 1932 essay “The Stage in Boston in the Last Fifty Years”, Charles Grandgent calls the Comique “the first real motion picture theatre in (Boston).” His essay appeared in the huge book “Fifty Years of Boston” published in 1932 by the Boston Tercentary committee. Douglass Shand Tucci, in his 1977 paper, “The Boston Rialto” (published by the City Conservation League) mentions Grandgent’s essay in his source-notes, but says that the grand old gent was “not entirely reliable on movie houses”. Grandgent also points out that the Comique had “about 350” seats.

And I should add that Grandgent also points out that the Comique closed “only a few years ago.” (He was writing in 1932).

Boston film pioneer Joe Cifre, in his lengthy undated essay “Saga of the Movie Industry in Boston” says that Mitch and Moe Mark of Lynn MA opened the Theatre Comique on Tremont Row on August 30, 1906. He says that it did “a stand-out business at a dime a throw”. Later, he says, Mitch and Moe Mark joined with Joe and Max Levinson to open the famous Strand Theatre on Broadway in NY.

Probably the same 1916 photo from almost three years ago but the Bostonian Society states it too is from 1916 so it’s 1916.

And frankly I doubt it was built into an existing building

Mitch and Moe Mark, who opened the Comique, were not actually from Lynn MA, although they operated an early cinema there. They were from outside New England and were true film pioneers, recognizing the potential of the medium way back in the mid-1890s. Their early cinema ventures were adaptations of existing buildings until into the 1910s when they were involved in new construction. It seems unlikely that the Marks would have purchased a building on Tremont Row, demolished it, and build the Comique as a new structure. If so, what happened to it? It isn’t there in 1930s and 1940s photos. I think only the fancy facade was new.

David Kruh’s “Always Something Doing” has pictures on pages 22 and 27 gives the clear answer to the when it was built: it wasn’t original to when Tremont Row was first built, it was a later tear down/rebuild along with a few of the other buildings on that block.

There are several old photos in which the Comique can be seen in the book “Scollay Square” by David Kruh published in 2004 by Arcadia Publishing – Images of America series. By studying the buildings on either side of the Comique, especially the building to the left, one can easily locate the site of the theater in photos of that block taken in the 1940s-1950s. Another spotting feature is the two dormer windows up on the roof line of the Comique. These were covered over with signs which advertised the admission price. But the two dormers, uncovered, are there in the later photos.