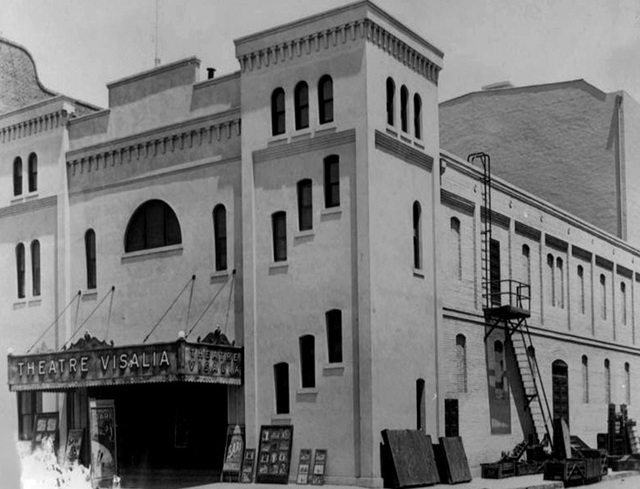 The Theatre Visalia opened in December 1914 and was a conversion of the old Armory building which was built in 1889. It was located on the corner of W. Acequia Avenue and S. Court Street.

Initially owned and operated as an independent by A. Levis, Susman Mitchell and W.R. Spaulding, it was taken over by William Fox in late 1928. By 1st January 1929 the Fox Theatre Visalia was screening ‘talkies’. By then, plans were made to build a new Fox theatre to replace the existing theatre.

It was announced in November 1929 that Sunday vaudeville performances would be suspended for a few weeks until the new Visalia Fox Theatre opened. However building work on the new theatre was running slightly behind schedule and it wasn’t until 26th February 1930 that the old Fox Theatre Visalia closed for good. The final film shown was “It’s A Great Life” starring The Duncan Sisters.

Any further information on this building would be appreciated.

The Theatre Visalia closed in 1930 when the new Visalia Fox Theatre was opened. It was also immediately demolished and the site remains a parking lot.

The Theatre Visalia contained an ancient 1921 2 manual 9 rank style 210 Wurlitzer that was to have been installed in the new Fox Theatre. However, the new Fox was not yet ready for the organ and the organ was removed and added to by Louis A. Maas of Los Angeles (Maas Organ Company) and reinstalled as a jazzy 10-rank organ with an English Post Horn in the incredible Fox Theatre in Phoenix, AZ.

A small 5 rank Robert Morton was later rebuilt by Maas from a theatre in Santa Monica and installed as a 7 rank organ in the new Visalia Fox.

The rest of Ken Roe’s information above is spot-on.

Southwest Builder and Contractor of July 11, 1914, named the Fresno architectural firm of Swartz, Hotchin and Swartz as those who prepared the plans for remodeling the armory into Theatre Visalia for Spaulding, Mitchell and Levi. An issue of the same magazine from May, 1913, had mentioned two Los Angeles architects as being engaged for the project, but that deal must have fallen through.

Isn’t this a duplicate of this listing?

The theatre was a converted armory and the poor old thing looked like it. Fox wanted a bigger and better building in Visalia and built the “new” Fox, the present Fox in circa 1930. When the new theatre opened, the old Theatre Visalia was demolished. Its site is still a parking lot.

May please you give me the exact number of old address on Acequia Ave and Court St. I need to know where it exactly was there…

Please you respond my comment. Thank you for be patient and cooperate with me today.

I have a small calendar from 1923 that has a picture of a woman by the name of Mae Allison. On the bottom of the calendar it say’s Theatre Visalia,Tulare County Leading Playhouse. Does anyone know anything about Mae Allison?

Here is a photo of Theatre Visalia from the 1920s.