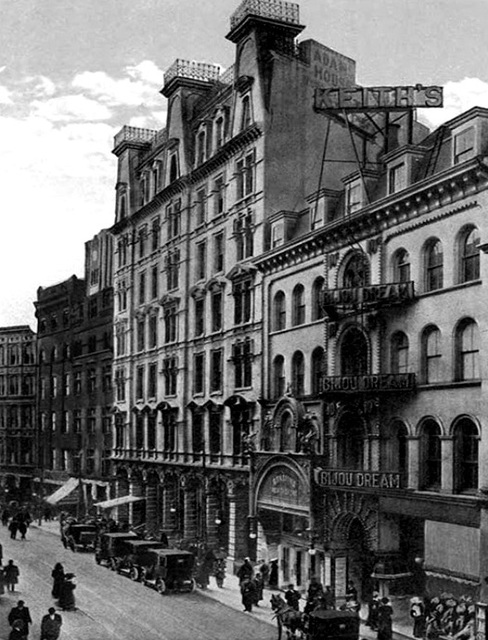 The Bijou Theatre opened on December 11, 1882 as a “Parlor Opera House” featuring Gilbert and Sullivan’s “Iolanthe”.

It was located on the second floor of an annex to the next-door Adams House hotel. It replaced an earlier theatre in the same building that at various times was called the Lion, the Mechanics Institute, the Melodeon Varieties, the New Melodeon, and the Gaiety.

B.F. Keith took over the Bijou Theatre in 1886 and began to stage vaudeville shows there. Later he converted it to show movies and renamed it the Bijou Dream Theatre. At one point it was also called the Intown Theatre.

The Bijou Theatre continued operating into the 1940’s, but after the horrific Cocoanut Grove nightclub fire of 1942, Boston enacted stricter fire laws that doomed the Bijou Theatre. Its exits led not to the street but rather to two neighboring theatres, the old BF Keith Theatre (later called the Normandie Theatre and the Laffmovie Theatre) and the newer Keith Memorial Theatre (much later called the Savoy Theatre and the Boston Opera House).

Eventually the Bijou Theatre was razed to the orchestra and stage floors, which became the roof of the stores below.

Until a few years ago, the former Bijou Theatre entrance was a storefront containing a pinball and video amusements arcade.

Most of what remained of the Bijou Theatre building was demolished in 2008, leaving only its front facade standing. Emerson College redeveloped the Bijou Theatre property, along with the adjoining Paramount Theatre, into a new theatre and dormitory complex.

A restaurant called Bijou will open this fall at 51 Stuart Street. Stuff Magazine and Zagat both report that the name was inspired by the former Bijou Theatre a few blocks away, because it was “the first in the country to be equipped with an electrical lighting system”.

The Boston Herald today quotes the operator of the new Bijou restaurant and night club opening in Oct on Stuart Street as saying “I wanted to hit on something that really had a history in Boston. ‘Bijou’ really stuck out because it was the first theater in the country to have electricity, and nightclubs are all about lighting, sound and electricity.” The Bijou’s electrical system was installed by Thomas Edison himself and was touted at the time as the first 100% electric theater operation in the USA. I don’t how valid that claim is. Certainly it was one of the very first.

Emerson College’s newly opened Paramount Center contains a Black Box Theatre and a Bright Family Screening Room (for movies), both built within the footprint of the old Bijou. The Paramount’s lobby areas contain wall exhibits that pay extensive tribute to the Bijou.

In the balcony foyer of Emerson’s new Paramount there is a huge color rendering of the interior of the Bijou Theatre on opening night in 1882 with G&S' “Iolanthe” on stage. The original print is in the Harvard Theatre Collection and possibly in other libraries as well. The pespective is from the rear of the Bijou balcony looking toward the stage with a full house present.

The Bijou is listed as the Bijou Dream Theatre in the 1927 Film Daily Yearbook. Shown as having 800 seats.

Another downtown Boston venue which was closed due to the new 1943 fire regulations was the Steinert Hall, a concert hall on Boylston Street just a short walk south of the Colonial Theatre entrance. Unlike the Bijou it was not demolished and is still there, intact. A short while ago the local TV news on either Channel 5 or Channel 7 featured a brief visit to the Hall. The camera panned around inside (all intact, somewhat shabby, seats removed)and made the point that it could reopen if suitable fire exits are created. Someone Who Was There was inside it recently and said that with the construction of the new State Transportation Building, the lay of the land at the rear of the Hall is now different and perhaps suitable fire exits could be created there.

The July, 1911, issue of a magazine called New Boston featured a brief article with an encomium for B. F. Keith’s Bijou Theatre:

“During the month of June hundreds of visiting social workers, interested in the dangers and possibilities of the moving picture show, will be in Boston attending the various meetings of a half dozen or more charities conferences. In order to show these visitors the possibilities in the development of a moving picture theater, Mrs. Josephine Clement, the manager of B. F. Keith’s Bijou Theater, has arranged a program of special interest for the week of June 7-14. The two and one-half hour entertainment will consist of motion pictures, musical numbers, and the one act play or opera that are parts of the regular program, and will include also specially arranged illustrated talks on topics of social and civic interest, prepared by a local conference committee. A visit to the Bijou will illustrate how the liberality and broad-mindedness of Mr. Keith have raised the ordinary moving picture show to the level of refined entertainment without sacrificing life and sparkle to ‘uplift.’

“The Bijou Theater is not an educational institution in any sense of the word; its sole purpose is to amuse. The management believes, however, that a motion picture entertainment may be made both interesting and diverting without depicting the antics of hoodlums or the tawdry sentiment of the dime novel. During the past three years, the entire program at the Bijou has been developed from material supplied directly to the management, no agents having been employed.

“The regular program of motion pictures — always with one educational film — is varied by ten minute, illustrated, camera chats, one act dramas presented by the Bijou players, stereopticon views of subjects of contemporary interest, and high grade vocal and instrumental music. As a sample of the best development of the motion picture theater, visitors to Boston should not neglect the Bijou.”

We here at the site fixed the google street view which hadn’t shown downtown Boston. Thanks to Ken Roe for his diligence.