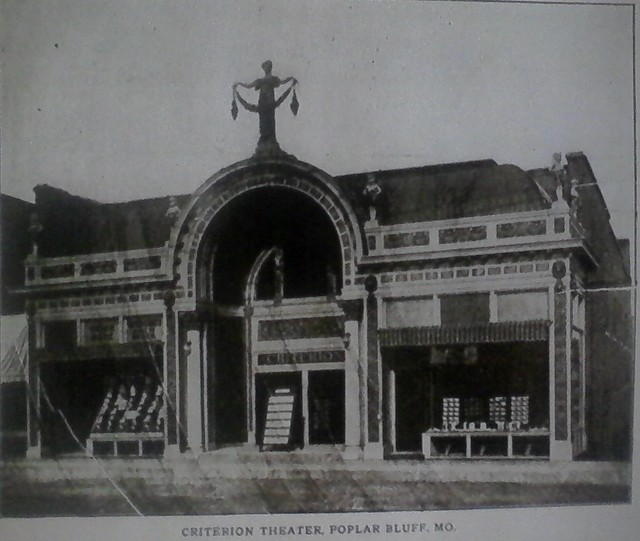 I found a photo of the Criterion Theater on a Poplar Bluff, Missouri history site. The caption under the photo reads:

“The Criterion Theater was an early Pine Bluff movie house. It sat on the west side of W. Main Street at the corner of W. Pine Street. In the late-1940’s, cowboy movie star Tex Ritter made a personal appearance at the Criterion Theater. Eventually the building became the Grabers department store. Today, the building is gone, and the area is a parking lot”.

The Criterion Theater was still open in 1957 when it was operated by the Rodgers Theatres chain.

There’s a bit about the early history of the Criterion on this page, which is devoted mostly to the Rodgers Theatre and its builder, I.W. Rodgers.

The Criterion was built in 1911, by William N. Barron. After it was damaged by a fire in 1914, Barron leased the theatre to Rodgers, who repaired it and later bought it from him. Rodgers closed the Criterion when he opened the nearby Rodgers Theatre in 1949, according to this website, but another Poplar Bluff history website has a photo which leads me to suspect that the Criterion might have been open into the early 1950s.

This page features a couple of nocturnal color photos of Poplar Bluff ca.1954 (click them to embiggen). The second one shows the Rodgers Theatre at 4th (now Broadway) and Pine, but the first picture shows Main Street, and it includes a bright but blurry set of lights in the distance which look to me very much like the marquee and vertical sign of a theatre, and it looks to me as though the vertical says “Criterion”. The caption of the photo doesn’t mention the theatre, though, so maybe I’m imagining I see it.

Also, there’s a black and white aerial photo from 1949 sharing the page with the two night photos which shows the geographic relationship between the Criterion, facing the town’s Courthouse square in the foreground, and the Rodgers one block farther down and across Pine Street, to the right.