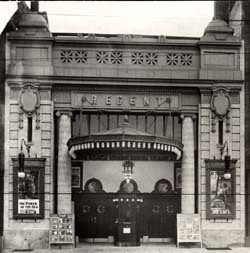 Opened in November 1913 as the Regent Theatre, it was equipped with a Kimball 2 manual 12 ranks organ. It was operated by the Stanley Company of America. In 1916 it was taken over by Alexander Boyd, who operated it until 1929 when it was renamed Film Guild Cinema. By the end of 1929 it had been renamed Cinema Art, which was short lived. On March 2, 1930 it was renamed Hollywood Theatre, but 4-months later new management took over and it went back to its Regent Theatre name. Again it was not long lasting and it became the Europa Theatre, screening foreign movies.

Taken over by new owners on December 16, 1938, it was renamed Studio Theatre, again screening foreign films, which over the years tended to be adult themed. It may be best remembered for receiving a visit from the police when it dared to screen the Brigitte Bardot film “And God Created Woman” in the late-1950’s. By the 1970’s it was staying open all night and showing rather more explicit material. As an adult theatre it was closed on April 5, 1978 following a police raid. Demolished around 1980 along with the neighboring Fox Theatre and Milgram Theatre to make way for office buildings.

He came down to Atlantic City in the Summer of 1973 and worked mostly at the Shore Theatre. I was working at the Ventnor, seven nights a week.

His sister was the co-host of the Frank Rizzo show on WCAU-AM 1210.

I found the old Philadelphia Daily News article, dated May 25th, 1973.
It sure turned yellow since Steve gave it to me.
View link

Frank Rizzo was the mayor when I started college in 1979. He was an interesting guy.

The Europa can be seen in this circa 1930s photo from the Irvin Glazer theater collection:
http://tinyurl.com/pkwlyw

When I was at West Chester U and after I graduated I remember the Studio showed great foreign film double-bills, Godard, Antonioni, Bergman, Schlesinger, all the current greats of the period.
It was a small theater sandwiched in between some of the bigger palaces on Market. I seem to remember there were lounges (restrooms) down narrow staircases right off the front lobby.
In this respect the programming in the ‘60s was like some of the old pre-Disneyfied 42nd Street theaters in New York where you could see a foreign double bill much cheaper than at first run theaters like the Paris. (I also think the Studio was similar to the 42nd Streets in more ways than one).
I specifically remember seeing “The Pumpkin Eater” with Anne Bancroft there, and probably “Darling” with Julie Christie. Maybe also really odd films like (the now forgotten) “Day the Fish Came Out”!

The World down the street showed first run foreign films.

I think the theater you are remembering, Penway14, was the Center Theater. There were four theaters on that block of Market Street. The Fox was at the corner of 16th St. Next to that was the Stanton, later the Milgram. The Studio was in the middle of the block and specialized in Adult films. The Center was next to the Dewey’s luncheonette at the 17th St. corner. The Center, in the 60s and 70s, played double bills which usually changed three times a week (Sunday, Wednesday and Thursday), and usually included a cartoon or other short. I often went in the 60s when I played hookey in high school, and the 70s when I worked late shift on my first job. The Center was one of the Stanley-Warner chains three all-night theaters downtown. (The others were the Palace and Family, later Apollo.) The lounges were down a narrow stairway off the lobby, as you remember. Since it showed six features a week the Center had a very eclectic booking policy, showing every kind of movie except kids/family movies. They had dramas, westerns, sci-fi, horror, and often foreign/art films. I saw my first Polanski and Fellini films there. It was also the only theater I can remember that had a ‘Ladies Section’ reserved on the right side of the theater. It was eventually torn down to make room for the Liberty Place towers. Pity.

The studio around 1976 had live burlesk and x-rated movies also. It was one of the “better” adult oriented places to go.

Here is a new address for the 1955 photo mentioned above: http://newdavesrailpix.com/phila/htm/bvph092.htm

It was overhauled in 1929 by the Film Art’s Guild Circuit becoming the Film Guild Cinema on March 24, 1929 with Ivan Zamychkovsky in “Two Days,‘ “Hands, “Fall of the House of Usher,” and Charlie Chaplin’s “1 a.m.” It was the same bill used by the Guild to open its New York cinema. That operation lasted just under a year closing February 28, 1930 with “Because I Loved You.”

The Film Guild Cinema became the Hollywood Theatre on March 2, 1930 launching with Mae Murray in “Peacock Alley.” The Hollywood was, like the Film Guild Cinema, a flop and was discontinued less than a year later. The Hollywood Theatre became the Europa Theatre on January 14, 1930. The Europa primarily played European films - a return to a policy resembling the former Film Guild programming. The theatre was refreshed in 1936 to a more streamlined look by architects Thalheimer and Wietz with construction by United Building & Construction.

Technically, there is no evidence that the venue ever operated as the “Film Guild Theatre.” Also, the Cinema Art Theatre was at 6th and Poplar and there appears to be no such operational name at 1632 Market. So technically, the venue had five names (the Studio Theatre also known as the Regent Theatre, the Film Guild Cinema, the Hollywood Theatre, and the Europa Theatre) for those who might seek such information.

The original owner of the Regent Theatre was The Stanley Company of America, owned by Jules E. and Stanley V. Mastbaum. In 1916, this theatre was owned by Alexander Boyd, who also owned the Bijou Dream Theatre at 1205 Market Street, and later built the Boyd Theatre (aka Stanley Warner’s Boyd Theatre/United Artists Sameric 4 Theatre)