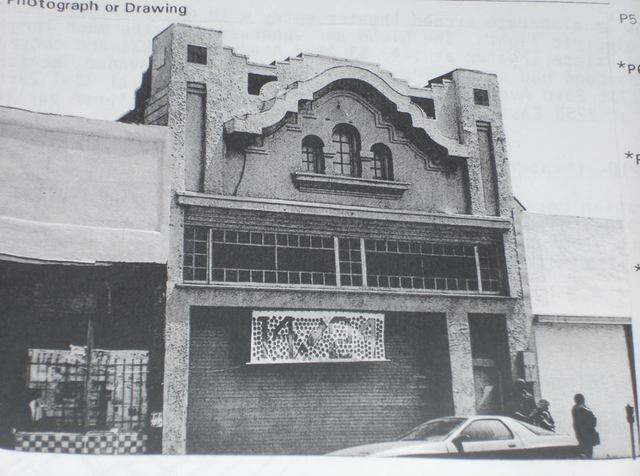 This theater operated from 1913 to 1923. It should not be confused with a later Globe Theater (q.v. as Telenews Theatre) in downtown Oakland.

Pleas of guilty were made by Harry Thomas and Earl A. Attlesey to the charge of violating the city ordinance against obscene pictures at the Globe Theater, 1422 Twenty Third Avenue, today before Police Judge George Samuels and each was fined $1.00. The charges of breaking the state law were dismissed against both men. It was alleged that the men were proprietors in the motion picture house that was raided while an alleged obscene film was being shownto a large number of men and boys. Wallace Asdy, the alleged operator, pleaded not guilty and his hearing was set for August 20, in Judge Samuelsâ€™ court. The same charge of breaking the state law against him was also dismissed.

The Globe Theater at 1424 23rd Ave. sits adjacent to the Palace Theater and is a treasure all and of herself. Built in 1912, this theater has a rich and dynamic history. The buildings construction site and build date shows a time period where East Oakland industries were beginning to thrive. This theater is one that established the historic 23rd Ave. Commercial District, a district of historical importance recognized by the Oakland Cultural Heritage Survey. During the late 80’s and 90’s it was called The Art Club. It is interesting to note that this was the first space that was rezoned for a live work loft, which has become a residential reuse of most of the old industrial buildings in the area, such as the Vulcan, Cotton Mill, and Dutch Boy Paint. This building was the first. The theater was built by a well known architect, who crafted hundreds of unique buildings in Oakland, named A.W. Smith. It is said that he was notably mannered and an exuberant craftsmen. The Globe was a co project between Benjamin D. Phillips and Steven D. Neppach the first a cattle rancher/real estate owner the latter a produce salesmen with a store next door. The theater held major vaudeville shows but was primarily a movie house with an all day rate, showing mostly family films, newsreels, and documentaries. However there was an instance of great gossip and debate involving the theater being raided in 1919 for showing lewd/pornographic movies to men. The owners at the time Harry Thomas and Earl A. Attlesey were later taken to court and fined, as well as the operator Wallace Assay. It shows the ramblin’ nature of this thriving commercial district where “sarsaparilla” signs hung in the windows of prohibition era “soda” bars, and people came to enjoy theater, movies and nightlife. The Globe was put out of business by the construction of the larger reinforced Palace Theater in 1923. A treasure of Oakland; the Globe is still standing today.