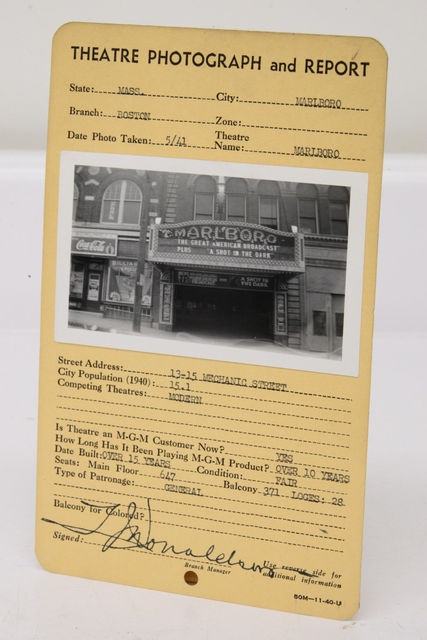 The theatre was built in the 1920’s and demolished in the early 1970’s. I went to the movies here in the Fifties as a child. At night they would run first-run features. On weekends matinees consisted of two movies, a serial, and several cartoons. It cost a quarter for admission.

I have a MGM Theatre Photograph and Report form for a Marlboro Theatre in Marlboro, MA. The address is 13- 15 Mechanic Street. The photo of the entrance, unfortunately, is not good. It shows a marquee with “Marlboro”, lots of chase lights, and 2 rows below the name, each having white letters on a black background. Attractions are “The Great American Broadcast” and “A Shot in the Dark”. Above, on the second floor there are numerous arched windows. The Report states that the theatre has been playing MGM product for over 10 years; that it is over 15 years old; that it is in Fair condition; and has 647 seats on the orchestra floor; 371 seats in the balcony; plus 28 Loge seats, total: 1046. It states that a competing theatre is the Modern Th., also on Mechanic St. It gives the 1940 population of Marlboro as 15,100.

Address was 13-15 Mechanic Street per the image at the top.
Multiple photos added courtesy Roger Martin Cheney as well.