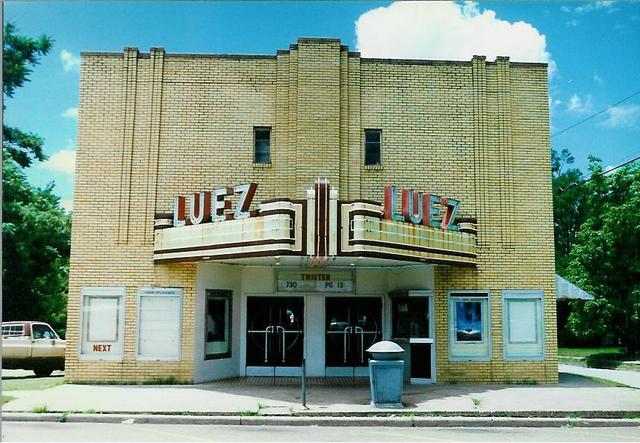 It’s really refreshing to be in a state chocked full of beautiful landscapes and functional town centers with little or no sign of stock chain stores or coffee shops. Bolivar’s Luez Theatre is a jewel, stylish, comfortable and with just enough state of the art technology to make any film reeling from its projector an event.

This is the second generation Luez Theatre, having moved from its original 1936 site on Market Street to its current location in 1948. You can get a view of its exterior and more detailed information via the Luez website.

Jack – did you submit the website link? I can’t find it online.
Is this a spanish language theater? I find it referenced as Theatre Luez in a lot of Spanish yellow pages. Also, the town name suggests that it is located in a latino community or has some connection with South America.

The website is http://www.timelesstribute.net/pages/6/ (you’ll need to scroll down to the bottom of the page for information on the theatre. To the best of my knowledge the theatre primarly shows english films without subtitles.

The Luez has not altered much over the years…here it is in 1996:
View link

Both the first and second Luez theaters were originally owned and operated by Louise Mask. A January 18, 1941, Boxoffice item gives the origin of the theater’s unusual name. Ms. Mask wanted a name with only four letters, and when building the first theater held a naming contest for it. The name Luez, a phonic contraction the name Louise, was the winning submission. I’ve found Louise Mask mentioned in Boxoffice as operator of the Luez as late as 1967.

Responding to teecee’s post, the town renamed itself after Simon Bolivar, the Liberator of Latin America, in 1825. It’s a rural town and county in West Tennessee.