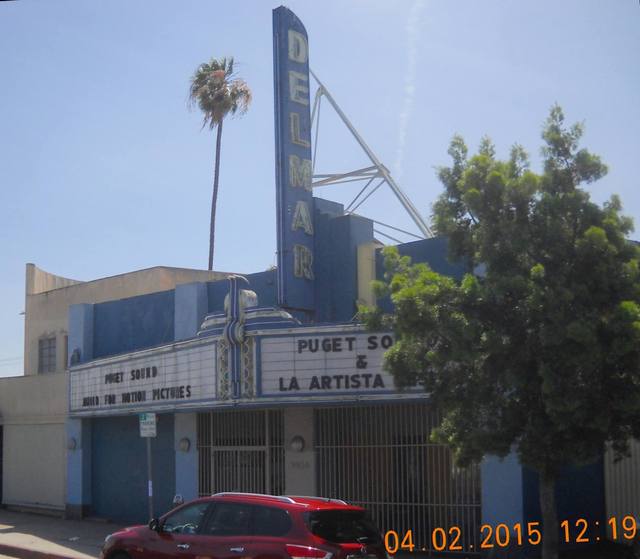 The Del Mar Theatre was opened on April 8, 1939 with Penny Singleton in “Blondie” and Jean Arthur in “You Can’t Take It with You”. It was still open in 1957.

I recall the del Mar Theater from my first days as an independent filmmaker in 1974.
The message for programming droned on with no characterizations “This is the Del Mar Theater by recording.â€
I loved the affordable and remote and somewhat dilapidated surroundings as a place to meditate on all those films.
‘Now we are losing Bing theater and I recently visited the Paley center for media in Beverly Hills.
The particular showing from the John Frankenheimer retrospective had one other person in the audience.
I recall days at the Newart and the Fox Venice and the Tiffany and many more revival houses.
The theater going public of today still exists but I believe they are locked safely and affordably in their houses.
What is missing is the SHARED EXPERIENCE IN THE DARK where you hear others laughing or screaming at an episode and the realization that we all agree far more than we know on what is interesting.
Now I make a film and I am hard pressed to imagine an opening at someplace like the Del Mar.
Visit my film page if you will
www.myspace.com/project_lodestar_sagas

Hi there,
My name is Joe Milner, Iâ€™m the owner of the Del Mar Theater, and my company, Puget Sound, Inc., does post-production sound editing and mixing for films. We have a mixing and ADR stage in the rear of what was once the main auditorium, and my girlfriend Laura Mendoza has her graphic design studio, La Artista Design, in the main room as well.

When I got the building in 2001, it had long since been gutted; no seats, screen, lobby equipment, projection, etc. The raked floor had been removed, and a new level slab poured. At that time, it was being used as a photography studio. The exterior was as you see in Bob Mezaâ€™s photo above; dead marquee, boarded-up ticket booth, many coats of whitewash, poster frames missing. Through the City of Los Angelesâ€™ Pico Revitalization project in 2003-05, the marquee was restored and is lit every night, the building was painted, and the slate tiles around the base of the building uncovered. I restored the booth and exterior poster frames myself. I’m hoping to find a solution that will allow me to demolish the ugly security fence, yet still keep the booth and outer terrazzo foyer protected.

I often get questions about reopening as a cinema, but even without the inherent problems of keeping a one-screen theater in business these days, the ongoing problem of a complete lack of parking in this area makes the idea a non-starter.

So for now, although it is not an actual cinema, I’m doing my best to at least keep it as part of the moviemaking process!

Thanks for the report, Joe.
I’ve driven by this house a lot and always wondered if it was being used for anything.
It’s great to see the marquee lit.

It was beautiful to see the Delmar sign lit as I stood outside Theatre Theatre across the street yesterday waiting to go in and see a play, “Small Engine Repair.”

I try to use Metro from N Hollywood as much as possible and used the opportunity to walk Pico from Fairfax to La Brea. Not much business activity; however, there is an oasis around the Delmar(a comedy club, equity waiver theater, and Roscoe’s Chicken & Waffles, where I had great scrambled eggs in a very business restaurant).

The Delmar sign is visible for a number of blocks and an anchor for the neighborhood.

I enjoyed info. on the Delmar theater I the saw movie
Julie there in about 1957 with Doris Day and Louie Jourdan. Great Movie,My first movie .They also showed
movies I believe in the mid 80ties for a little bit.Johnnie W.

This Flickr link has a night shot, plus many other theaters. Copy & paste to view.

Hi Joe Miller, I’m not sure if you are still the owner of the Del Mar theater, I noticed that it sold in June of 2016. I’m looking for a super creative space for my business. I currently operate The Desmond building, accross from the El Rey theater. Thanks for any information that you may have.