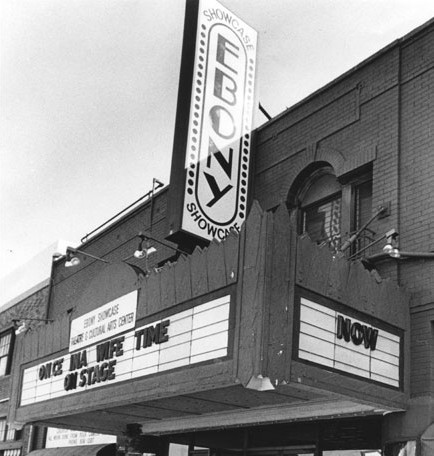 One of many neighborhood theaters that dotted the streets of Los Angeles, this little gem lasted until the early 1990’s, as a small performing arts theater. During its later years it was known as the Ebony Theatre.

It, too, has been demolished.

I remember that, in the early 1960s, this theater was quite well known for its ongoing concert series, Jazz at The Metro. I heard it mentioned on the local jazz radio station at the time, which I think was KBFK-FM, and it was frequently plugged in the entertainment section of The Los Angeles Times. I always intended to check it out, but never got around to it.

Listed as the Rimpau in the 1925 city directory, so that should be an aka.

Could that radio station have been KBCA the famous early FM jazz station?

I believe you are correct, Clarkus. It was KBCA.

In the 1990s the Community Renewal Agency of Los Angeles seized the Ebony Theatre’s buildings by eminent domain. Despite assurances from the agency and from Nate Holden, then the city councilman for the area, that the theatre would be saved, the buildings were demolished in September of 1998. Today the site is occupied by a multi-million dollar arts and theatre complex owned by the CRA and named for Holden.

Three small photos of the theatre in its later years can be seen on this web page at the site maintained by Nick and Edna Stewart’s daughter, Valerie Stewart. Other pages on the site tell the story of the Ebony Showcase, and of its sad fate at the hands of the city’s urban renewal agency.

The photos mentioned above are of the demoliton of the theater edifice. Other photos of the CRA’s illegal demolition of the Ebony Showcase edifice (a demolition which took place in September, 1998, on my birthday — without a demoliton permit) are at http://www.ebonyshowcase.org/pals -
http://www.ebonyshowcase.org/cra-rupt.htm and http://www.peopleneedtoknow.com . It is my intention to tell the true story of the demolition of the theatre edifice and ancillary buildings that housed the theater; and to raise enough money to move our projects to another theater. Photos of the city’s Nate Holden Performing Arts Center are at View link

I meant to mention above that I am Valarie Stewart, the daughter of Nick and Edna Stewart.

Here is a 1983 photo of the Ebony Theater:
http://tinyurl.com/cw4qmp