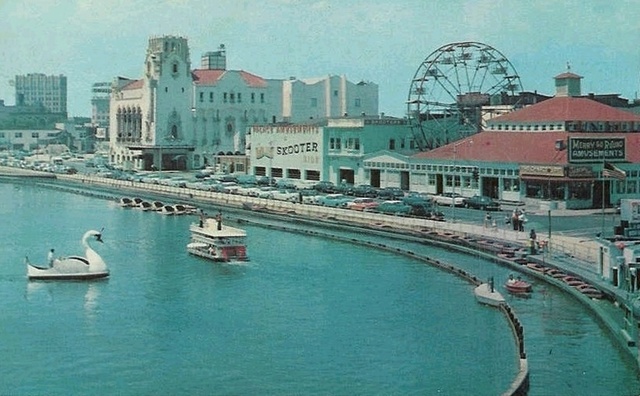 The New St. James Theatre was opened on August 23, 1917 with Dorothy Dalton in “The Flame of the Yukon”. It was designed by architect Thomas White Lamb. By 1965 this theatre had a Todd-AO projector.

It really is heartbreaking seeing the old postcards of Asbury Park. I vacationed there as a boy with my family in the 60s. It was a very beautiful seaside town with both honky-tonk and class side by side. I don’t think anything like it exists today.

The St James and Mayfair were great theaters. How lucky people were back then to have such wonderful movie theaters to go to after a day at the beach and then a late evening stroll on the boardwalk.

Although Henry Rosenberg built the theater, he had changed the family surname to Reade by the start of World War I, (c.1914). The St. James Theatre didn’t open until 1917.

Since the top of the marquee said Reade, it could be said that the name of the theater was Reade St. James Theatre. But in practicality, Reade was never used as a part of the theater’s name.

And Rosenberg was never a part of its name!

Just a clarification on Gary Crawford’s comment (April 17, 2008 at 11:23 am) that the theatre was originally named the Rosenberg Theatre. Again, it never was! It opened as the (Reade) St. James Theatre in 1917 and retaind that name, or a variation, until its demolition in 1974. Please, let’s check the accuracy of our comments. Thanks!

Saw Hello Dolly here in July ‘70. Believe it was in Todd AO. Wonderful roadshow theater. Comfortable with large screen. Sat mat and practically empty. No reserved seats and continuous showings. By that time roadshow presentation was just about dead though Dolly was still paying exclusive engagements and would go wide later in the summer.

I do think mezz was 50 cents more than orch or balc. Though I just sat there anyway and usherette didn’t mind.

Going through some old records, I believe that I took the info of the St. James being called The Rosenberg from George Clark, the longtime projectionist there. He was a walking history book, but he could spin a few yarns as well. With the evidence presented above, I officially retract my statements as to the original name of the theatre.

Thank you CC. It’s a theater I miss and I was only in it once when I saw a Todd AO print of Hello Dolly in the summer of 70.

A great 70mm roadshow house.I remember an aunt and uncle going to see MFL here and paying the outrageous sum of $4 a ticket. A crazy amount of money to see a movie in ‘65.

A very late response to Gilbert Carney’s comment from 2006 about the 35/70 Norelco projectors. Yes, they (and the Ascraft lamps) did go to the King Theater in Seattle which was also a Walter Reade house. They were serial numbers 713 and 714. The King did not last long as a Walter Reade house, after the bankruptcy it sat empty for a time then was operated by General Cinema until 1992. I was projectionist at the King during mid 1980’s