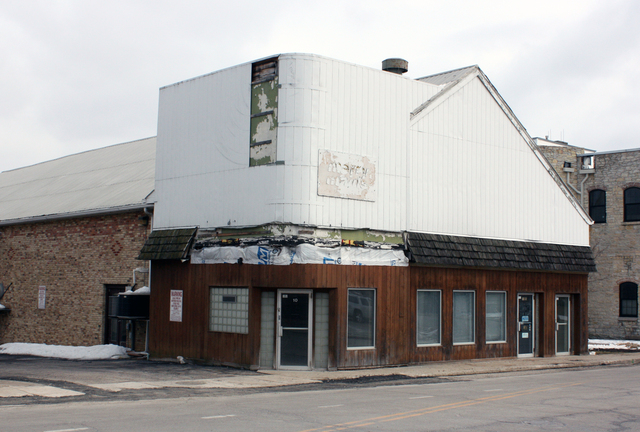 Originally built in 1880 to house a music hall, it opened as a skating rink. In 1912 it was converted into an opera house and in 1917 it became a movie theater named the Vanity Theater.

In 1939 it was re-named the Capitol Theater and by 1950 it is operating as the Batavia Theater. Closed in 1953, the building served various retail uses before sitting vacant for many years. In 2010, it was transformed into offices for an architectural engineering firm.

I lived in Batavia as a child between 1963 and 1968 — There was no functioning theatre there during those years. I can’t recall a building that might have once been a theatre either. Any ideas?

I guess not…my FDY says the Capitol was on Island Avenue.

When I was in the US Army in 1964, while on leave, I visited a former barracks mate who lived in Batavia. He and his father owned the old Batavia theater, which they were using as living quarters and business space. At that time there was nothing on the exterior to indicate that it had been a theater at one time, but the lobby and auditorium were still in place.

Originally the address was 10 S. Island Avenue, but this has now been re-named S. Shumway Avenue.

I recently was told about this theatre and another theatre in a town just south of St. Charles (starts with the letter G)where the Arcada is located. Any photos of the Batavia?

Patsy must be referring to the Geneva Theatre in Geneva, IL. Geneva is the first city north of Batavia and just south of St. Charles (where the Arcada Theatre is located).

I recently found this old picture of the Batavia/Capitol Theatre when it was still a theatre.

This article indicates that that a grant has been awarded to rehabilitate the building, apparently into office space: View link