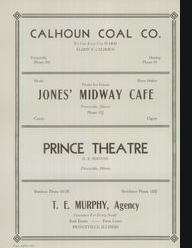 This little movie house, located on N. Walnut Avenue in the village of Princeville, operated from 1939 until the 1970’s.

It has since been demolished and a store is now on the site.

From the July 2, 1943 issue of Film Daily, news about the Prince Theatre:

“The Prince, Princeville, Ill., in the Peoria district, has been reopened by its new owner, Harold Bouton. House was damaged by fire several weeks ago and was later sold by Ernest Peltier to Bouton. It has been entirely repaired and redecorated.”

A piece about Princeville’s businesses says this:

“Variety stores-Golden Rule The Golden Rule Store was in business around in the 1920s-30s. It was located on the west side of Walnut where Cordis Law Office is now located. It was later converted into a movie theater.”

The current address of the law firm Cordis & Cordis is 129 N. Walnut Avenue. As tiny Princeville is unlikely to have had more than one movie theater during that period, this was most likely the location of the Prince. If it was, then the building appears to be still standing, but somewhat altered. I’ll upload a small photo of the Golden Rule store, which can be compared with a recent Bing Maps street view (Google doesn’t provide one.)

My computer is acting up and won’t allow me to upload a photo, but the photo of the Golden Rule store’s building is the 29th in the slide show on this web page. The Bing Maps street view is at this link.

Uploaded an image from the Princeville High School 1946 Maroon Yearbook in which the Prince had a booster ad.

This has not been demolished. It’s clear from the satellite view that the building has been covered in that cheap and awful facade along with a neighbor. In fact, the theater building portion has an obvious gap between the front of the building and that tacky plywood mess.