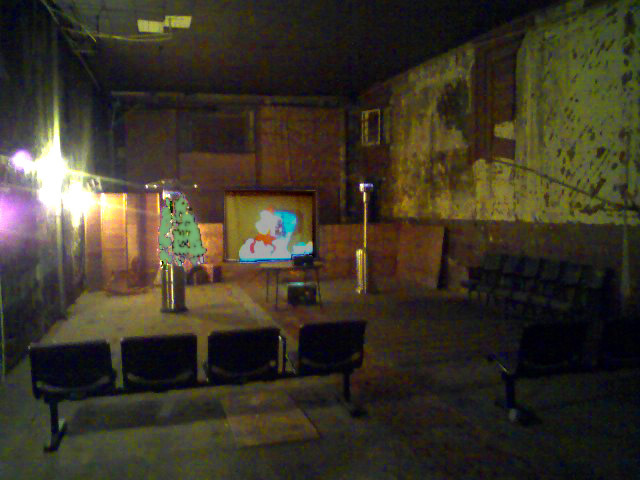 Built by 1886 as a general store with offices and a store room on the 2nd floor. The Star Theatre was opened by 1913, and the 2nd floor had been converted into a cigar factory. Marion Bodwell opened the Paramount Theatre in 1934. Bodwell added a wonderful Art Deco-style marquee spelling out the theatre’s name in elegant, neon-lit lettering, as well as an outdoor ticket booth. The theatre sat around 280 and would continue to be a popular feature of Wyoming’s downtown for decades.

The Paramount Theatre closed in 1969, several years after Marion Bodwell handed over the operation of the theatre to his son Tom. Though the family briefly reopened the Paramount Theatre on a limited basis in 1987, it closed once more not long after.

In the late-1990’s, the Paramount Theatre was sold to Barry Sprout and reopened, but closed once more in 2000. This beauty unfortunately remains closed in 2022, and is up for sale.

For a long tiome it siad now playing Gone With the Wind on the marquee.

The lawn mower shop is actaully in what was an ice cream stand next to the theatre that also doubled as the theatre concessoon stand. Non theatre patrons could get refeshments with oiut entering the theatre when it was in operation.

The seats from the theatre are in a vacnt store front a couple of doors down from the theatre. A few years ago someone bought the place and started working on fixing it up even had volunteer work days to get local people to help but they ran out of money before it was done. from what I undertand a lot of major structural work was done before they ran out of funds.

I just added a picture and the descripton I typed did not seem to go with it. Itwas taken this evening and is of the theatre with the marquee all lit up. The city bought the theatrea nd it is being fixed up by volunteers and people who donate money. Not sure what they will do with it when it is all fixed up, The marquee was finished before the inside and was lit up on Sunday 26-10-14 lights were on last night and tonite .

The history is inaccurate. The 1913 map shows this as The Star, offering moving pictures but also a stage and scenery. The cigar factory is located on the second floor. I don’t know that it was ever a bank, that was probably a mixup with the little thing on the corner. From 1886 to 1907 it appears as a general store with offices and a store room on the second floor.

The Star Theatre originally operated in another location, and moved in 1912. The July 13 issue of Moving Picture World said “[t]he Star Theater, larger, more comfortable and more modern, is now housed in the Patterson Building, at Wyoming, Ill.” If the Star is at this location on the 1913 map, this must have been the Patterson Building. The Star is not listed in the 1914-1915 American Motion Picture Directory, though that publication is known not to have been exhaustive, so the Star could have been still in operation then. Still, I haven’t found it mentioned in the trade journals.

This Paramount Theatre did open in 1934, but owner Marion Bodwell was operating a house of that name from 1923 on. It was mentioned in the March 29, 1924 issue of Exhibitors Herald. In that issue, Bodwell says that his theater was an upstairs house, so it must not have occupied the same space as the old Star. An article about Bodwell appeared in Boxoffice of November 6, 1948, commemorating his 25th anniversary in the theater business, and it was in that article that he said he moved the Paramount into the ground floor location in August, 1934.

One puzzle is that the Paramount is not listed in the Film Daily Yearbook until 1929, and Wyoming doesn’t appear in the book at all in 1927 and 1928. In 1926 the Lyceum is the only theater listed, though in the 1948 article Bodwell says that house closed within a year after he opened the Paramount on October 21, 1923. As usual, I think we can blame FDY for the inaccuracies.

However, if the original Paramount was an upstairs theater and didn’t open in this location until 1934, and was the only theater in town for several years prior to that, the space it moved into where the old Star had once been must have been used for something other than a theater in the interim. That could have been for as long as two decades, if the Star did in fact close before the 1914 Directory was published.

Good possibilities for upstairs use would be the masonic lodge on the NE corner of Williams and 7th, a dance hall at 109-111 E Williams, or last, a small hall at 114 E Williams.

In the 1948 article, Bodwell says that he opened the Paramount in “Harty’s Hall” which had been a dance hall, so the place at 109-111 might be most likely.

Another puzzle in Wyoming is the Lyceum Theatre, which is where Bodwell began working at the age of ten, in 1914. That year the AMPD listed the Lyceum at 101 Main Street (Main Avenue on modern maps), but a 1916 Moving Picture World item notes the opening of a new Lyceum. One possibility I haven’t been able to either confirm or eliminate is that the Lyceum moved into the Star’s former location that year, since it was already set up as a theater. The Lyceum is the only house mentioned in the trades until the Paramount appears in 1924.

I will create a listing for the first Paramount.

The address for the Lyceum is confusing. Elm St is called Main on the old maps. Main is also Main on those maps, except the block between Elm and Williams, which is called Elm. Anyhow, what is now Elm is all houses where a 101 would be, except a small old store on the corner with 7th, but it faces 7th.

Main Ave is very clearly not terribly ‘main’. On the old maps this area is a collection of mostly wooden buildings (a big lumberyard, the waterworks, livery stables, etc.). There was also a railyard with 5 tracks where the Rock Island, which ran diagonally behind downtown, met up with the CB&Q. Seems an odd neighborhood for a theater, but it would have had to have been 101 N, perhaps where the green shed is now. That entire half block is empty on the 1913 map, with the exception of the house at 111.