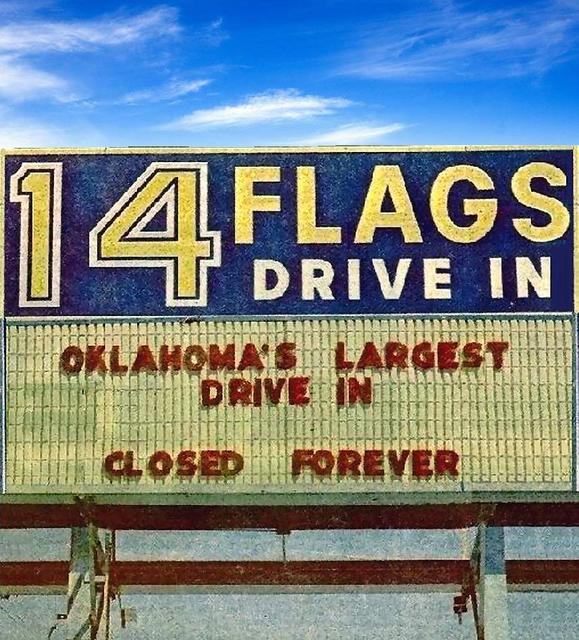 The 14 Flags Drive-In had the distinction of being the largest drive-in ever built in Oklahoma. It opened on July 3, 1968 with Charles Bronson in “Villa Rides”, Clint Walker in The Night of the Grizzly" and Anthony Perkins in “Psycho”. It accomodated 1,600 cars on 28 acres. The screen was 132 feet by 80 feet.

The theatre has been demolished and the lot is now occupied by the Western Flags Addition. The final films were “Amityville: The Possession”, “Mark of the Devil, Part II” and “Death Wish”.

Used to have a fireworks show every July 4th after the movie. I lived about two miles away and would watch the fireworks from the street corner. When it was built, 14 Flags was out in the country, just south of the neighborhoods in south Okla. City. In the late 70’s, housing additions and expansion (along with slow sales I guess) led to the demolition of the drive in and building of housing in the area. I went to middle school just a mile down the road.

Located at 99th and South Western, West side of road

1968, Jun 30 Largest Drive-in theater in Oklahoma to open in city

1979 IMPA Capacity not given. Owner listed as Staton Enterprises

Last show was Sept 30, 1982 (coincided with Mid America Theatres going out of business.)

The first drive in theatre I ever worked at. While writing a paper in English Comp at the local Junior College, I decided to write about what happened to the drive-in theatres.

I went out to interview the manager and ended up getting hired as the assistant manager/ relief projectionist.

Enjoyed the heck out of it! Wish I could go back and do it again as the 14 flags was the best drive-in in the city. Although they were non union, it allowed me to get into the union the next year. A career that would keep me engaged well into the ‘80’s.

we moved to okc in 1976 and our back fence ran parallel to the entrance road of 14 Flags. When i was 10 i could stand on the fence and talk to the people going in and watch the movies from our roof. Some years later they actually ran a speaker cable down the row of houses on the entrance road but some idiots stole the cable and ruined it for everyone. Im 43 now and still live in the same house on the entance road. I have a lot of good memories of 14 Flags and i miss it to this day…..

Opened with “Villa rides” and “The night of the grizzy” and “Psycho”. Was there 14 flags on the drive-in site, hence the name?