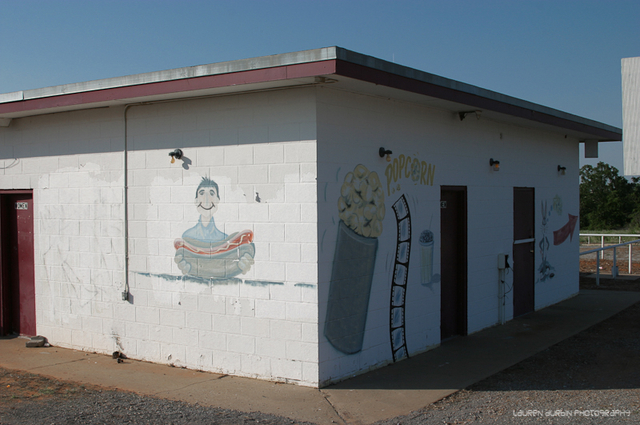 After some period of time of closure, it was re-opened in 1999. It remained open as a twin screen showing first run attractions until 2011. It had been sold to an oilfield service company in 2010. It was demolished in November 2011, and the site is now used for Big Rig shop, which is a trucking company.

in 2013, the original owner of the 40 West Drive-In, Woodie Sylvester, is still alive and going strong at the age of 96.

thanks i will try

i was able to get some info ty

This theater has recently been demolished. :(

A Historic Drive In gone. How sad!

There are some additional photos here.

Currently, the Big Rig Shop occupies the property with no trace of the drive-in remaining. http://tinyurl.com/lmgv6p6

Looks like the old concession building is still standing.

I’d like to hear more details about who ran the 66 Twin in the late 2000s. The last reference that I’ve seen so far was a mention in the Okmulgee Daily Times in June 2007 as an active drive-in in the state. And then there was a reported arrest in August 2007. (I have no idea how that case came out, and any arrestee should be considered innocent until proven guilty.) Co-owner Cecil George, who retired in 2006, passed away in his home in 2011, per this obituary.

The concession stand was torn down. All that is left is the foundation.