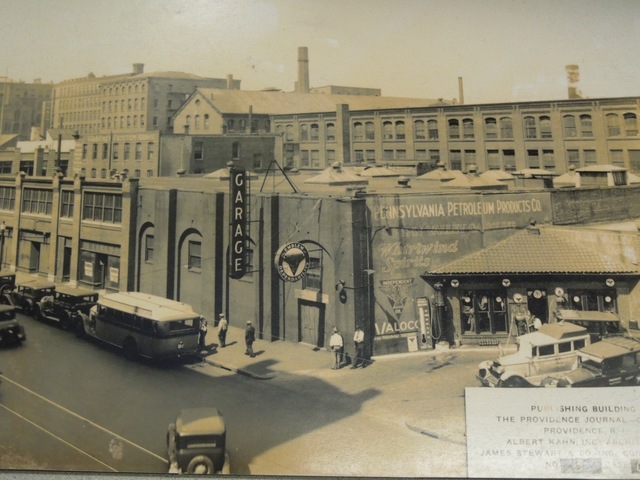 Located on Fountain Street, between Mathewson Street and Union Street. The Hippodrome was a large theatre in the center of Providence that was used for live spectaculars as well as for movies during the silent era. The Hippodrome was opened January 9, 1915. Also called “The Hip”, the theatre was a short-lived venture and closed November 11, 1916 with “Dante’s Inferno”.

Eventually the place was demolished and later the Providence Journal built its large new building there to publish and print Rhode Island’s largest daily newspaper.

Here is a movie ad for the Hippodrome from the Christmas season of 1915. Note the presence of Mr. Edward M. Fay, Providence showman and theatre owner as well as musician. He led the orchestra accompanying the movies. But who could afford those admission prices?

From “The Board of Trade Journal” of April, 1915:
“Too many theatres? Nothing of the sort! The Emery is turning away people at every performance. The "Hip,” with its very large auditorium, is packed to the doors. The Bijou and Nickel can’t accomodate those seeking to see “the movies,” neither can the Gaiety, the Scenic, the Union or the Casino. Out in OLneyville Spitz & Nathanson’s new theatre has all it can attend to."

The history of the Hippodrome or “Hip” is one of utter disaster. It is recounted by Roger Brett in his Temples of Illusion, and is synthesized here:

“Now, with the Union and Scenic doing well, Charlie Allen once again had a dream. He had been to New York City and had taken in a few shows at the famous Hippodrome, that mammoth pleasure palace on Sixth Avenue that held 5000 people. The stage there was so big that the greatest spectacles ever seen in an American theater were mounted on it… (…)

“As 1913 waned, the local theatrical fraternity had learned that Allen had acquired the entire block bounded by Fountain, Union, Sabin, and Mathewson Streets and was planning to build his own version of the New York Hippodrome…. (…)

“During the fall [1914] , while the Gaiety and Emery were opening, Charlie Allen was having second thoughts about his unfinished Hippodrome. Competetive houses were fairly leaping out of the watery excavations of downtown Providence, and there would soon be another one, a very large one, in the next block at Washington and Union Streets. This one was the Strand, being built by a corporation of businessmen in emulation of New York’s movie palaces.

“(…) Now it was clear to Allen that his Hippodrome was going to require more time and more money. And where were the spectacles going to come from anyway? He had no bookings. There he sat with a foundation, a floor, and walls only one storey high. So…he had the roof trusses set in place at what should have been balcony level, bricked up the proscenium opening…and prepared to open for business as a film theater.

“It opened with a matinee on January 9, 1915, sans fanfare, and with its name shortened to Hip. At least, that’s what the electric sign read that hung over the front entrance on Union Street…. This truly immense theater covered 34,000 square feet with side walls on Fountain and Sabin Streets. The stage, if it had ever been completed, would have had its loading doors on Mathewson Street.

“The Hip is one of the most forgotten of the city’s theaters and there are no known photographs of it. A newspaper report of its opening stated that the exterior had ‘a rambling and fortress-like appearance’ of brick facing on concrete walls. The interior…was described as ‘vast, and in dull red and green with 3,000 leather upholstered seats sweeping between six aisles.’(…) The Hip boasted of having the largest projection booth in the world…. [it] may have been converted from part or all of the balcony framework. Allen’s claims of ‘the largest’ were an attempted cover-up for the aborted condition of the house….

“The newspaper report continued…,‘the largest theater lobby in the world…runs the entire width of the front with many doors opening on all sides.’ (…) The only stairs…were two flights that led to nowhere…on each side of the stage. (…)

“[Allen] advertised the Hip as ‘the largest one floor theater in the world, 3,000 seats for 10Â¢.’ It was a final attempt at face-saving but it didn’t work. The few people who did attend thought it was just too depressing to watch a movie surrounded by a sea of empty seats….

“The Strand…made its appearance on June 12, 1915…the man in the street and his missus favored the Strand and so sealed the doom of the Hippodrome. There would be no more dreams of grandeur for 73-year-old Charlie Allen and he passed away on November 27th of that year. (…) The Hip closed after two years, the seats were taken out, and it became a parking garage, still named the Hip.”

The site of the Hippodrome is where the Providence Journal Building is today.

In October, 1916 the Hippodrome…or Hip…was showing the influential Italian-made spectacular Cabiria by Giovanni Pastrone. It had opened in New York in 1914. It may have already played elsewhere in Providence too. Anyway, the ad proclaimed: 2200 seats at 10 cents.