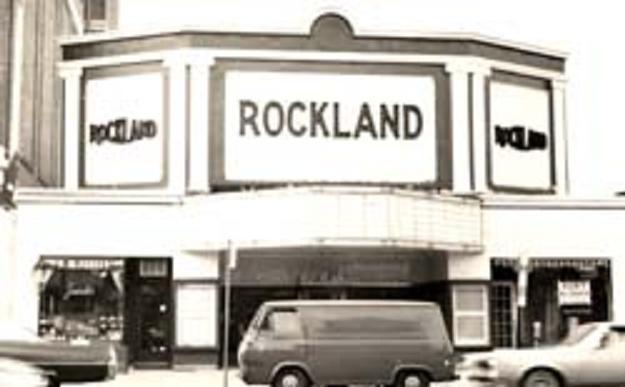 The Rockland Theatre, a close neighbor to the Logan Theatre in North Philadelphia. A.F. Schenck was listed as the original architect. The theatre was opened with 500-seats in Spring of 1915 and by 1931 it was operated by Hunt’s Theaters Inc. It was rebuilt in March 1927 with 850-seats to the plans of architectural firm Magaziner, Eberhard & Harris who gave it a Spanish Renaissance style. In 1941 alterations in an Art Deco style were carried out to the plans of architectural firm Thalheimer & Weitz. By 1950 it was operated by the A.M. Ellis Theaters Co. chain. It was closed on October 11, 1970 with John Cassavetes in Machine Gun McCain" & Telly Savalas in “Land Raiders”. It was demolished in late-1970.

Unfortunately, we had to “flee” the neighborhood back in the summer of 1969. I was only nine years old at the time. We did however, manage to take a lot of great memories from our beloved Logan neighborhood and going to the Rockland Theatre certainly was one of them along with the Logan Theatre. Sadly, both theatres met the same fate. Being in the wrong neighborhood at the wrong time!

You forgot the Broad Theatre on the otherside of the street. Remember itbetween the two theatres(Logan and the Rockland) The site of the rockland is now bell telephone building. Good time were had at all three. rg

rg, I vaguly remember that one (Broad). WOW, for some reason and I’m tryin my damdist here, we never went to that one and i don’t know why! I’m thinkin now,i remember mom in Her 1960 Chevy station wagon and all of us kids piled in it,slowen down in front of the Broad but for some reason i don’t think i went to that one ,of all the times we went to the other two,which is why i probably did'nt remember it till you mentioned it. I got make some calls now….

rg, i spoke to my 80 yr old dad. Anyway, he did, after a minute, recall the Broad. He said, from what he remember’s, that the Broad was a smaller theater then the Rockland/Logan. Do You remember roughly how big it was compared to the other two? And do You recall if it had a double door entrance off to the side with the ticket booth inside? For some reason i seem to remember that. Keep in mind, i was born in 60' so You slightly to moderate older guy’s have a better recollection of those detail’s over me. Also, my dad could'nt recall the name but he asked about the theater at Broad and Oloney. Do You remember that one?

JBon, The Broad was the smallest of the three theatres with a cap. of 499. It closed in the 70’s and was turned into a union hall and now a church. The other theatre furthe north was the Esquire (orig. the Grange) caps. 1000 seats at 5717-19 N. Broad. On the orthe side of the street was the Bromley Theatre at Broad and Old York Rd. It was turned into Wagners Ballroom in the late 50’s. Hope this helps. rg

hi guys—-i’m surprised no one has made comments since 2005—-we use to live at 4915 n. carlisle st and every saturday with my .25 cent allowance I and at least 2 of my girl friends would go to one of the 3 theatres within the 2 blocks of our house (Logan, Rockland or Broad)—-this was in the early 50’s and believe it or not the going price for a movie ticket was $ 0.09 —-with my quarter allowance i could get into the theatre, buy a soda, candy bar or ice cream and popcorn—-I do also remember very clearly how the neighborhood kids got really up in arms when the price of a movie ticket went up from .09 to .10 —-we were insenced (sp. ??)—-how dare they!!!!!!—-I went to Holy Child Catholic School in the neighborhood, i remember there was a little park right across the street from it—-I looked it up just lately and found that they have changed the name of the church—-not sure why—-I have many sweet memories of my childhood in north philly and also remember how safe it was for us kids to play in the street or roller skate at night in the summers when it was still light very late in the evening—-also the fun we had at halloween and all the kids were out knocking on houses and no one had to worry about razor blades in apples that were handed out!!!—-I also remember that all the businesses on broad street would stay open on halloween so they could hand out cookies and cupcakes from Horn and Hardarts or get free boxes of crayons from the five and dime or candy bars from the drugs store on the corner of Rockland st and broad——i don’t think the children of today who only are exercising their thumbs on their cell phones understand how much fun it was to get out into the neighborhood and actually communicate face to face——i’m just glad i didn’t miss that kind of fun—-thanks for letting me share, Toni v., a fellow PHILADELPHIAN :)

I used to live on the 4600 block of old York road, 1 block from the Logan theatre. I used to play around the theatre, mostly climbing to the top of the water tower which of course is not there anymore. Had fun going to the Esquire, Rockland theater also

The Rockland Theatre opened in 1915, not 1914. Here is an item announcing the status of the project in the February 20, 1915, issue of The American Contractor:

As contracts for painting and roofing had been let at this time, the project was pretty close to completion, making an opening in the spring of 1915 very likely.

The Rockland Theatre should be listed in the Logan-Fern Rock neighborhood, along with the nearby Logan and Broad Theatres (all of them in a three-block stretch of Broad Street) instead of Germantown, which is some distance west.

William Hunt / Hunt’s Enterprise operated the venue at 4910-4914 North Broad Street from 1922 to 1942. Listed as a Spanish architecture theatre, in 1941 the theatre was modernized to the plans of Thalheimer and Weitz bringing a streamlined look. The theatre was transferred to A.M. Ellis Theatres in 1943. Ellis also launched the Chester Pike D-I on My 26, 1949. The Rockland ceased operations following showtimes on October 11, 1970 with “Machine Gun McCain” and “Land Raiders.”