Friends of the Boyd Theatre (Official) 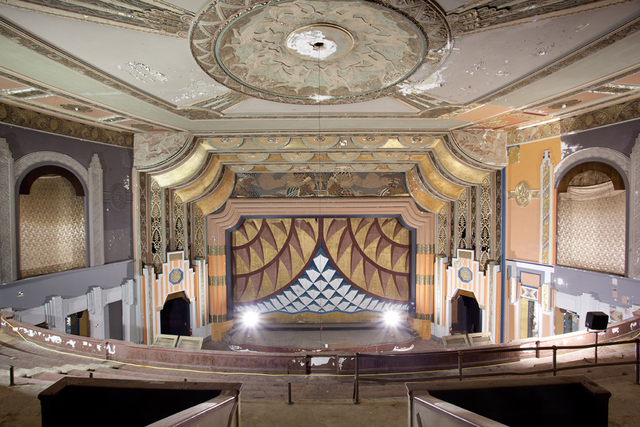 Opened on December 25, 1928, the Boyd Theatre, recently known as the Sameric Theatre, was the last operating movie palace in downtown Philadelphia until it closed in 2002.

The Boyd Theatre was built for Alexander R. Boyd and designed by Philadelphia theatre architectural firm Hoffman-Henon Co. Since acclaimed as an ‘Art Deco masterpiece’, the Boyd Theatre had a towering vertical sign that advertised the theatre a mile away, an outdoor retail promenade, an ornate ticket booth, and a huge colorful window with Art Deco style motifs. The grand lobby was lined with huge etched glass mirrors and had an area carpeted, which was imported from Czechoslovakia. The three level foyer had dazzling colorful mirrors two stories high. Equipped with an orchestra pit, a Kimball 3 manual, 19 ranks pipe organ (opened by organist Otto Beck), and a stage house, the auditorium had 2,450 seats (including one balcony) and perfect sightlines. The Opening Day program dedicated the Boyd Theatre to the theme of ‘The Triumph of the modern woman’ which was depicted in the proscenium mural by famed artist Alfred Tulk of the Rambusch Company. The opening movie was “Interference” starring Evelyn Brent, Doris Kenyon, Clive Brook & William Powell supported by short subjects starring Eddy Cantor and Ruth Etting, a Walt Disney’s cartoon “Steamboat Willie”, the cartoon “The Toy Shop” and “Movietone News”.

Shortly after opening, Boyd sold the theatre to Warner Bros., which also purchased the Stanley Co. Most of downtown Philadelphia’s movie theatres were then operated under the Stanley Warner banner.

Although the theatre had clearly seen better days, the Art Deco style movie palace stood as a reminder of what once was. Warner Brothers musicals shown included in 1929, “On With the Show” and “Show of Shows” and in 1931, “Hold Everything”. Many classic films had their exclusive first runs here, including in 1937, “The Life of Emile Zola” and “The Good Earth”, in 1939 “The Wizard of Oz” and in 1940 “Gone with the Wind”. The world premiere of “Kitty Foyle” was hosted on December 27, 1940. “The Philadelphia Story” was shown in 1941 at the same time that the stage play, also starring Katherine Hepburn, was at the Forrest Theatre, less than a mile away. “Mildred Pierce” was presented in 1945. With his co-star Kathryn Grayson, Philadelphia opera singer Mario Lanza appeared on stage at the world premiere of his first movie, “That Midnight Kiss” on August 29, 1949. “The Great Caruso”, “Alice in Wonderland”, “A Place in the Sun” and “A Streetcar Named Desire” were among the movies shown in 1951. “The Greatest Show on Earth” and “High Noon” (with Grace Kelly appearing in person on opening night) were featured in 1952. “Walt Disney’s "Peter Pan” was on the big screen in early-1953.

In 1953, due to antitrust laws, Stanley Warner Theatres were relinquished by the Hollywood studio and became RKO Stanley Warner Theatres, and that year local architect William Howard Lee oversaw renovations at the Boyd Theatre that included a new curved marquee, new ticket booth, and a huge movie screen. The Boyd Theatre had hugely successful sold out in advance runs as Philadelphia’s only venue for all the 3-strip Cinerama movies, starting October 6, 1953 with “This is Cinerama” (which was shown for more than one year, to an estimated three quarters of a million people) and concluding with a 39 week run of “How the West Was Won” in 1963. The Boyd Theatre hosted many of Philadelphia’s first run 70mm Roadshows including “Ben Hur” (with Charlton Heston appearing in person to promote the film, 1959), “Judgment at Nuremburg”(1961), “Becket”(1964) and “Doctor Zhivago”(1965). With stars Fred MacMurray, John Davidson, Hermione Baddeley, and Joyce Bulifant appearing in person, the Philadelphia premiere of “The Happiest Millionaire” was held on October 20, 1967 at the Boyd Theatre. The Kimball organ, after having not played for decades, was played by organist Larry Ferrari at a 1969 farewell concert at the Boyd Theatre and the instrument was donated to the Dickinson Theatre Organ Society in the state of Delaware, which plays at its concerts.

In 1971, the Boyd Theatre was sold to the Sameric Corporation, which renamed the theatre the Sam Eric Theatre, refurbished and reopened with “Fiddler on the Roof”. ‘Sam Eric’ became combined as SamEric. At midnight on May 23, 1973, the SamEric Theatre hosted the world premiere of “Battle For the Planet of the Apes”, the fifth movie of the franchise. On July 16, 1982, new auditoriums Sameric 2 & 3 opened with about 450 seats each on Chestnut Street, on adjoining land west of the theatre. On June 12, 1985, the Sameric 4 opened with about 225 seats on adjoining land to the west of the two new auditoriums. As of 2007, those auditoriums were converted to retail space and the theatre became known as the Sameric 4. The world premiere of “Rocky III” was held at the Sameric on May 24, 1982. In 1988, the Sameric Corporation sold the Boyd Theatre along with their other theatres to the United Artists Circuit. In 1998, local developers, the Goldenberg Group, purchased the Boyd Theatre from United Artists.

The world premiere of the Academy Award winning movie “Philadelphia” was hosted at the movie palace in 1993 with Tom Hanks, Denzel Washington, and director Jonathan Demme appearing in person.

First run films continued until United Artists' departed from the theatre on May 2, 2002, which was followed by the owner Goldenberg obtaining a demolition permit. In June, 2002, concerned citizens organised the Committee to Save the Sameric, and later that year, incorporated the nonprofit organization, Friends of the Boyd, Inc.

In 2005, Clear Channel, Inc. purchased the Boyd Theatre and began preliminary work towards restoration for use as a legit theatre with a film program. Clear Channel’s theatre’s became an independent company called Live Nation, and in 2006, work ceased. In 2008, Philadelphia developer Hall Wheeler announced plans to acquire, restore and reopen the Boyd Theatre, but before he could do so, he died in 2010. For many years The Friends of the Boyd was trying to raise money and public awareness to save the last remaining movie palace in downtown Philadelphia.

In October 2013, it was announced that Live Nation would sell the Boyd Theatre to developer Neal Rodin who would lease it to iPic Theatres, if permission was obtained from the Philadelphia Historical Commission to demolish all but the Boyd’s façade. In February 2014, to save the Boyd Theatre, Friends of the Boyd offered Live Nation four and a half million Dollars, matching the sale price, as an anonymous foundation had committed those funds. On Friday, March 14, 2014, the Philadelphia Historical Commission approved the demolition permit via the economic hardship application, despite the purchase offer by Friends of the Boyd. On Monday, March 17, 2014, Boyd Theatre owner Live Nation began gutting the auditorium, an action preservationists perceived as a ‘scorched earth tactic’ to make less likely an appeal of the Historical Commission’s ruling.

In November 2014, Pearl Properties purchased the Boyd Theatre from Live Nation for four and a half million Dollars. Demolition of the auditorium began Saturday March 14, 2015. In 2017, construction began on a residential tower where the auditorium was. The Harper residential tower opened in 2019. Plans are to glass-in the outdoor vestibule of the surviving Boyd building facing Chestnut Street and use it and the grand lobby and the space that had been the three adjoining movie auditoriums for a restaurant.

Hello Boyd fans- never to be forgotten! To the question of how the Boyd handled 3 panel Cinerama and 70mm presentations, my family went to the Boyd to see Around the World in 80 Days in Todd-Ao, and it was presented on the Cinerama curved screen from the Center floor booth. I have no clue as to whether the Curved Cinerama screen was still in place for 70mm Cinerama. It was gone for Close Encounters in 70mm.

heartbreaking. I hate developers. I already hated livenation, but now I REALLY do

Next thing you know Independence Hall will be torn down and made into a parking lot. Philadelphia, the city that just doesn’t give a damn…..

Here’s a new 4-page 50th anniversary FIDDLER ON THE ROOF retrospective featuring a roadshow playdate chronology and historian Q&A. This venue’s lengthy run is mentioned in the piece.

to MSC77- since its not listed by such a name what theater listed was known as The Trans-Lix during the roadshow run of Those Magnificent Men………….

Thanks bigjoe59. I could not remember if TMMITFM was roadshow there. I know it was in NYC at the DeMille. It’s funny because I remember that next door the Arcadia had What’s New Pussycat.

I know I had this conversation way back on here but I am positive that when I saw Man Of La Mancha here (my first time at the theater) the curved Cinerama screen was still in place on the stage. When I went back in 1975 for a revival of GWTW, the flat screen was installed. I know historians say the screen was removed when SamEric theaters took over with Fiddler, but I am positive it was after Man Of La Mancha. Anyone else out there remember this? Had we had cell phones than I would have had pictures to show.

in the place of the grand titles that played when this venue was the majestic Boyd theatre is now the word “BANKROLL” in a poorly designed font. White letters on a black background.

We’ll presume that’s the name of the next alleged tenant.