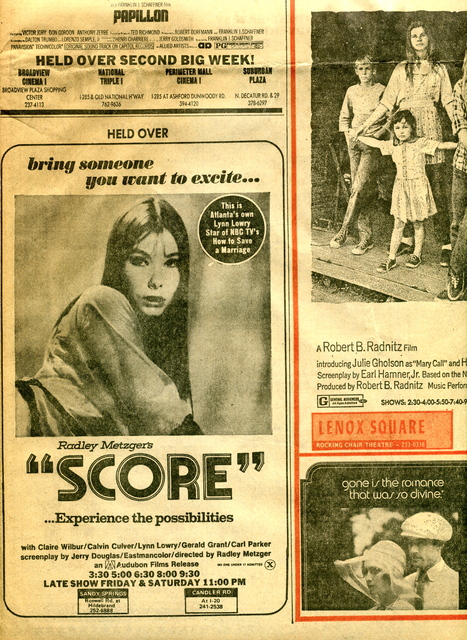 Built in an existing storefront by Modular Cinemas of America, and opened as the third Minicinema on December 18, 1968 with Tony Curtis in “The Boston Strangler”. It was always a single screen, second run theatre. It was closed in 1979.

The address on this page needs to be changed. The correct address is 6125 Roswell Road, Atlanta Ga. 30328. It is now the location of the Brickery Restaurant. When the Sandy Springs closed up, it was completely gutted for a seafood restaurant and in 1990 that one gave way to the Brickery. This December (2015), the Brickery will close and the entire shopping center will be demolished for a new development. This was the first shopping center built in Sandy Springs and dates to about 1960. The theater was built in 1968 and closed about 1979 or so.

The current address at the top of the page is for an apartment complex about a mile south and inside I-285.

Cinema 285 is the original name of a theater across the road and down a block which was located at 5930 Roswell Road 30328. It is now an AKA name since the shopping center that it was located in was renamed Hammond Square shortly after the theater opened. The name of the theater was changed by its operator, Georgia Theater Company to Hammond Square Cinema in a vain effort to give people a better idea of where to find it. Its page on CT is:

In summary, this page should be named Sandy Springs Mini Cinema. The address is now correct. The status should be “Demolished” and 350 seats can be added if you wish. Under previously operated by, delete Georgia Theater Company and put Weis Theaters. Under previous names leave Sandy Springs Theater and add Weis Sandy Springs. Sorry for the confusion. These corrections should clear things up. The problem stems from two theaters with almost identical time lines being located acrss the street from each other. Also, the introduction is almost completely wrong. I think that Jack was using newspaper ads for his sources and these places changed names and in the case of this location owners as well. The customers were also confused as it was common for someone to walk in and after seeing what was playing ask where the movie they were looking for was. It was always at the other theater.

If you need a nice, short into for this page, try this:

“Built in an existing storefront by Modular Cinemas of America and opened as the third Mini Cinema during Christmas of 1967. Always a single screen second run neighborhood theater. Closed 1979.”

For what it is worth, all of the information on the Hammond Square Cinema page is correct.

Stan from all my readings it seems your are very good at clearing up confusion. I very much enjoy reading all that you write. So the ad in the header is for the theatre down the road not the Sandy Springs Mini Cinema

Chris, thank you for the compliment. I do my best although my memory does play tricks on me from time to time. It is nice to know that there are people out there who value such efforts.

As for your question, the above ad is on the correct page. This is confusing to someone who did not live it, but the easiest way to keep it straight is to remember that the other theater never had “Sandy Springs” in its name and kept the same owner the entire time. It opened as “Cinema 285” and before too long was renamed “Hammond Square Cinema” when the shopping center it was in was renamed. (The reason for all if this is in my intro for that theater on its page.) It was run by Georgia Theater Company for its entire run.

This location started off as “Sandy Springs Mini Cinema” the third of what would be a chain of five mini cinemas in the Atlanta region plus some out of town locations. In 1971 it was renamed “Sandy Springs Theater” by its franchisee when they pulled it out of the Mini Cinema chain when the chain was sold. In 1973 another new owner purchased all of the Atlanta properties and reunited them under the Mini Cinema name calling them “A Division of Conners Capital Corp.” (Except for the Peachtree Battle and Ansley Mall locations which had already been sold off.) In the summer of 1974, all of these plus the under construction triple on Franklin Road in Marietta were sold to Weis Theaters which was a major player in the Atlanta first run/exclusive run market.

This might not be exactly accurate, but it is the way the story was told to those of us who worked there at the time. The ad above is from the spring of 1974 based on what was playing. By this time I had graduated from college and was managing a theatre for Georgia Theatre Company. I can date this by the Papillon sub-run ad and the Great Gatsby ad to the right. (The Lenox ad was for Where The Lillies Bloom.) This was just a month or two before the chain was sold to Weis. The reason such a low rent film was playing in this neighborhood location was simple. The current owner, not nearly as nice to work for as the original people, owed money to all of the major studios for unpaid film rent plus National Screen and every concession supply house in town. The only distributors he could get product from were minor independents that he did not yet owe money to.

As to why Weis even got involved I do not know. They were a Savannah outfit and controlled that market, but they had no sub-run locations here. Maybe they wanted some or maybe they foresaw the coming of the end of the exclusive first run days and wanted a wider presence for the wide break patterns to come. If so they were very smart as in 1977 they got three of the four Atlanta bookings for Star Wars. However, they soon blind bid their way into the poor house and sold off their properties and left town.

Sandy Springs was the only one of their locations that did not continue on as a theater for at least a few years.

Stan, I got a tru understanding now, thanks.

This opened on December 18th, 1968. Grand opening ad in the photo section.

Conner’s Capital Corporation was an internal transfer in an effort to divert some money from our real estate to fund the theaters when C&S reneged on our funding agreement.
We opened Hail Hero first run Atlanta at Sandy Springs and Ansley. Michael Douglas first staring role. We had so few patrons, we took an add in the Atlanta Newspapers offering to pay $1.00 to anyone who would watch the movie. We limited it to the first 500 patrons. Turns out even if paid no one wanted to watch Michael Douglas in his first film. Cone Maddox

I am sure Cone can elaborate, but it was not closed until about 1979. It was sold to Weis in Summer of 1974 and they ran it several years. I can recall one of the later features as being Ode To Billy Joe because I remember seeing the projectionist local running a picket line there and at Doraville.

Cone I remember the ad for that Hail Hero. The first movie I saw here was Impossible Years. I also recall a four week run of Airport after it left its downtown run at the Rialto. True Grit in August of 1969 is another one I remember.