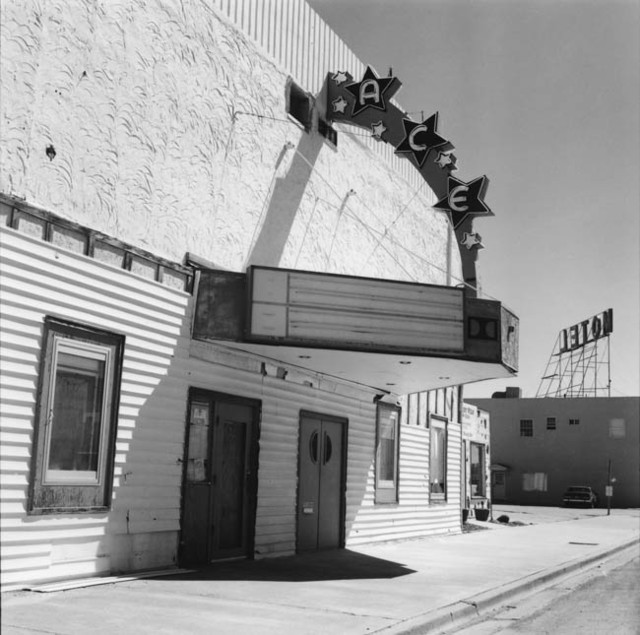 Originally built as a store in 1910. Dooley Perkins converted it into the Ace Theatre in February 1946. Wendell then had a population of about 2,000, with most of its economy revolving around farming.

During the late-1950’s Dooley rented the theatre out but continued to live in an apartment at the back of the theatre where he also operated his commercial sign-painting business, which at the time probably became more successful than the theatre.

Westerns were the biggest draw at the Ace Theatre while musicals didn’t fare too well. Two pictures that filled the house were Disney’s “Old Yeller” and a Ginger Rogers movie, “Teenage Rebel”. Some residents who were children in the 1950’s may remember the free Saturday matinees sponsored by the local merchants.

A 1970’s photo from the book “Silent Screens” shows the Ace Theatre as a thrift store. In the 1990’s it was twinned with seating listed as 267 and around this time, I believe, it was called Ace Theatre and Video. A Film Daily Year Book from the 1950’s gives it’s original seating as 480.

It was shuttered in early-2000 and an internet search shows the building to be the headquarters of a theatrical equipment and supply company. In 2015 plans were promoted to convert the building into a cinematic museum.

I am the current owner of the ACE. To update the statements above, Morris ‘Dooley’ Perkins opened the ACE in late 1945. The building is not a ‘quonset hut’ but was originally the Wendell Mercantile Co. opened in 1910. The all masonry building was modified in 1952 for Cinemascope and the roof line was raised as well as the proscenium was expanded for the larger picture. It was at this time the ‘barrel’ style roof purchased from a nearby school gymnasium was placed on top of the building. The theatre is being remodeled into a museum of motion picture technology and is still operational with 35mm film. There will be an interactive 1940s vintage carbon arc projection room as well as projectors and related movie equipment on display dating to the late 1890s. I currently have approx. 50+ vintage projectors for the museum and I am continuing my search for memorabilia regarding theatres in southern Idaho as well as equipment to place in the display. For more information, please email me.

My dad, Walton F. Pierce, leased the theater from Dooley Perkins around 1957-1958 for about 1 year. He would go around town collecting money from the merchants and bar owners for the free movie to draw people in to town on Saturday. I was the projectionist there and went on to run the projectors in Gooding for Bud Shubert, the owner of the hotel across the street from his theater. Next I went to Burley to work for the Harris family at the Burley Theater.

And then on to LA to work as spot man at the Paramount theater near Pershing Square. My duty was to stand under a spot light all day and direct people to the direction of there seat. Ushers would take over from there. All reels were measured with a counter and changeovers were made by a counter on each projector measuring how much film was left on the reel.

In the 1970’s I went back with my family to visit Dooley. He was desperate to sell the theater then. I told him that I was not much of a business man. The best teenage movie was “Rebel Without a Cause.” I had all the teens like me autograph it and I think that my brother Ron still has it.

Dooley Perkins owned several theaters. His best story was that at his theater in Buhl, Idaho his ushers started the pop corn machine and went out to play base ball until it was time for the customers to come in. They left the pop corn machine unattended, It caught the building on fire and it burned down. In my previous comment I forgot to say that the teens signed the movie poster. He only had one lung because of lung cancer due to smoking. He always drank Pepsi. In his younger days good income days he always drove a Cadillac. His wife divorced him and he remarried again. He could also play a violin and painted the bottom half of my Buick. Does any one know how old he lived to be.

The overview indicates the Ace was twinned in the 1990s. Does anyone have a more specific date?

To belatedly answer dickwpierce’s question, the Internet says that Morris “Dooley” Perkins died on February 12, 1990, and had been born December 19, 1904, which would have made him 85 at the time of his death.

I haven’t found out when the Ace was twinned, but the owner, John Eickhof (who commented on this thread earlier and was operating the house at the time it closed) might know.

Did you know Dully Personally.

I did not know Mr. Perkins, and merely found a few references to him on the Internet. I always lived in California myself, but I’ve never been directly connected with the movie industry.

Update…I am still working on the museum of projection and have found old records of Dooley’s exploits in the theatre biz. The ACE was built during 1909 as the Fullerton and Watson cash store and was one of the first permenant buildngs in the new town of Wendell. Dooley owned and operated the REX (AKA Valley) theatre in nearby Hagerman, He lived in Gooding and sold his interest in the Rex just prior to WW2 when he purchased the F&W store in Wendell to remodel into the new ACE. Dooley never lived in the ACE building as there was a small addition approx. 20x24ft on the rear of the building behind the screen. It housed Dooley’s sign shop, then was a bakery and lastly a dog grooming salon when I bought the building in 1990. I remodeled the space and the rear of ACE into a living space where I reside to present. Dooley spent the war years during the remodel, the once flat wooden floor of the store was removed and dug out with horse drawn fresno scrapers to make the 48" slope to the auditorium floor.I remodeled the theatre into a two screen in 1990 and opened in 1991.It was equipped with new Motiograph AA projectors and Mirrophonic sound system. It was slated to open in 1944 but due to the war effort, seats were not available due to metal shortages so the seats arrived in 1945! A new barrel type roof was added over the original wooden truss roof in 1952 and the screen was enlarged for cinemascope. Dooley went head to head with the nearby Odeon (aka Ward House) theatre for a few years when the Ward House finally stopped exhibiting films. I still have the original Viking popcorn popper that cost $1250.00 new in 1945!The #1 auditorium now houses the museum, the #2 auditorium is still intact equipped with two Simplex XL 35mm projectors set up for reel-to-reel and pltter with Dolby stereo and DTS digital sound, plus Xenon 16mm and Barco Digital Cinema projector.

I was about 17, graduated from Wendell hi in 1958. As said in other blogs my dad leased the theatre. When Dully returned from California I talked him in to painting the bottom half of my 51 Buick with white paint making it 2 tone. I lived in his trailer behind the theatre. The back room was just dirt floor. He framed it up and brought in a cement truck And I helped him flatten out the concrete.He used the back room near the alley for his sign advertising business. He lived and re-maired again to his second wife and lived to a good old age.