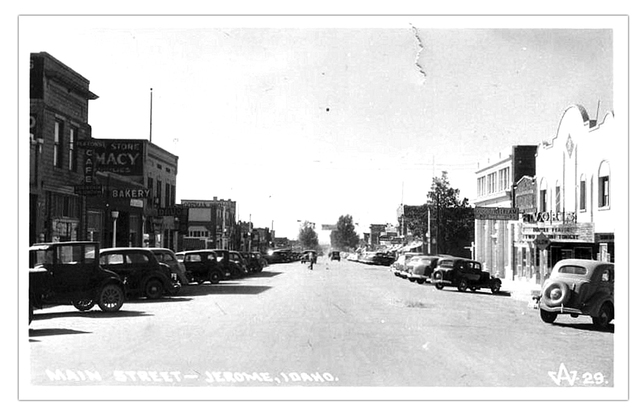 The Rialto Theatre was opened on August 16, 1917 with Marguerite Clark in “Miss George Washington” & Fatty Arbuckle in “The Butcher Boy”. Film Daily Yearbook of 1928 lists a Rialto Theatre in Jerome with a capacity of 500. In April 1935 it was purchased by the Harris-Voeller chain and renamed the Voris Theatre. They enlarged the theatre to a capacity of 728-seats and it reopened on November 22, 1935.

In 1969 the only theatre in a town of 4,761 residents was purchased by a new owner and renamed the Frontier Theatre. A 1970 story in the Idaho Falls Post-Register said that the owner started out showing G-rated pictures but he said ‘nobody came’, which put him $18,000 in the red. When he started an X-rated policy he was making $1,000 profit a month. The admission price was $3 and the owner said he was drawing 100 patrons a night, both men and women, with ages ranging from 21 to 65.

Pastors of the town’s 17 churches said they were alarmed about the effects of the theatre on the local morals and there also was an outcry by citizens who put petitions out urging its closing.

In 1971, the owner was sentenced to 30 days in jail and fined $500 for allowing two 15-year-old girl employees to see the previews for an X-rated film. The 29-year-old owner said he would not pay the fine.

In June 1972 under new owners, it returned to the Voris Theatre name, screening family movies, but this was a short lived venture. It was demolished in in August 1973 and the site is the parking lot for Wells Fargo Bank.

From the 1940s a photo postcard view of the Voris Theatre in Jerome.

Ivan H. Harris of the Harris-Voeller Circuit bought the Rialto Theatre in April of 1935. They enlarged the theatre relaunching it as the Voris Theatre on November 22, 1935