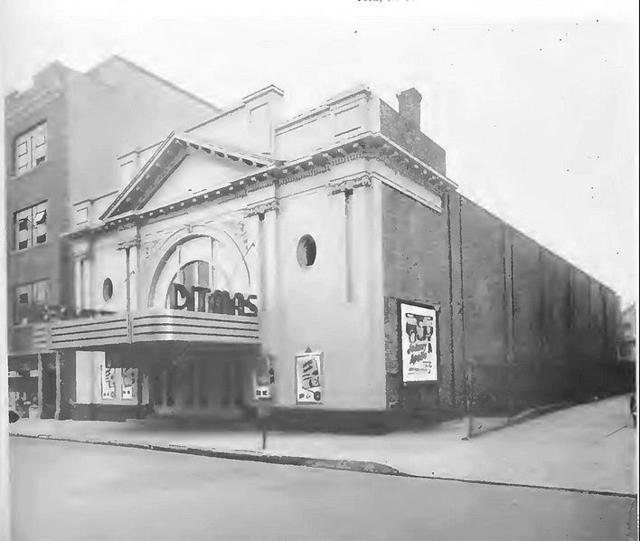 Apparently the Ditmas Theatre burnt down in the late 1940’s. Could be that the owners didn’t notify the listers on F.D.Y. straight away.

Here is a memoir from a local resident who confirms that the Ditmas burned down in 1948:
View link

My father Joe Pusillo was a projectionist for years at many of the downtown Perth Amboy theatres, including the Majestic and Royal. He mentioned the Ditmas to me, as I recall he worked there briefly after returning from WWII. As a side note, I was the last projectionist to work at the Royal when it closed in August 1988.

My grandfather, Carl DeMarco, was an organist at the Ditmas back in the teens and 20’s as far as I know. He noted it as his occupation on his WWI draft registration card, although he referred to it as the “Miller-Ditmas Theater”. He also played other instruments at various theaters, and later opened a music store in Perth Amboy. Thank you, Lost Memory, for the information on the book. It was nice to see a picture of the actual theater. Here is a link to the draft card on Ancestry.com View link

The January 1, 1916 issue of The Moving Picture World featured a brief article about the Ditmas Theatre (an exterior view of which is therewith produced.)

The August 30, 1913, issue of The American Contractor said that the Ditmas Theatre had been designed by the local architectural firm of J. N. Pierson & Son. The theater was to be a combination moving picture and vaudeville house. Construction bids were being taken.

A little more about the Ditmas…

The Ditmas operated an airdome on the lot directly behind the theatre during the spring and summer months between 1917 and 1919.

While matinee performances were still presented in the theatre, the evening shows were held outdoors, except when the weather wasn’t agreeable. There was also a special entrance to the theatre: in case of a sudden rainstorm, the entire audience could be moved indoors in a matter of minutes to continue the show.

When construction of the Airdome started in April 1917, the Perth Amboy Evening News ran an article giving a brief description of the new venue; it would have an inclined floor and 1000 seats facing the theatre building, where the screen was mounted high enough on the rear wall to afford an unobstructed view from every seat. There were two entrances, one on State Street where the theatre entrance was, and the other on King Street, where the Airdome had its frontage. Uniformed attendants were at either to park vehicles. Decorations were themed green in the “idea of a summer garden”, with “rustic arbors, plants and flowers”. Each patron was supplied with a cushion for their seat, there was a check room for personal items and of course a refreshment stand. A full orchestra accompanied the films and on occasion would present a concert as part of the entertainment. Special events and Saturday nights offered the option of catching the show either in the Airdome or theatre.

An ad for the 1917 opening night has been uploaded to the photo page.