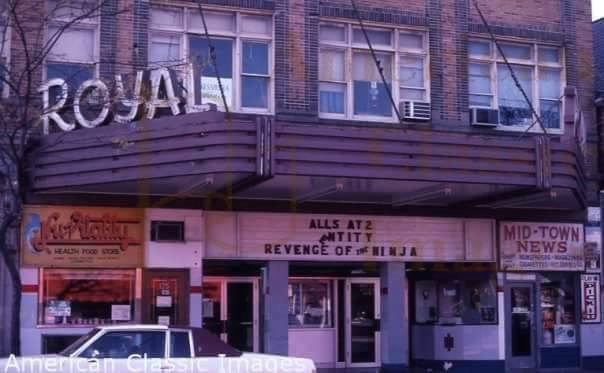 It closed in the early-1980’s, only to reopen around 1986. After this final attempt to show movies downtown, the theatre closed for good, with little fanfare, on July 9, 1988. The site today is senior citizens housing, with the foyer in use as a farmers market.

listed as part of Triangle-Liggett Theatre Service in the 1961 Film Daily Yearbook.

A ‘Casa-de-Fruitas’ farmers market occupies what was the lobby of this former theatre.

markp ~ any relation to Merrifield? I know of a father and son who used to work at the Strand Theater and the Majestic as porters in 1957?

Some updates for the Royal….

Royal was the 4th name this theatre held: previously, in reverse order, it was the Crescent, Liberty and City. These changes came in its first three years. Here’s short recap of its beginnings…

Built in 1916, it was part of the Raritan Building, a 4-story structure located downtown at the corner of Smith Street and Madison Avenue, it was to have 72 offices, 2 retail spaces, and the city’s first passenger elevator. Excavation started in November of 1915, but it wasn’t until the middle of March that plans were announced to add a theatre that “will be used for the production of vaudeville and moving pictures”. Modified plans were handed over later in the month by John Noble Pierson and his son Aylin Pierson, the credited architects for both the building and theatre.

The new theatre was to be operated by the City Amusement Company and called the City Theatre. City Amusement was supposedly composed of several New York men, but an earlier article mentioned the company was backed by “local capital”, most likely David Snaper and William Brown of the Royal Theatre Company, operators of the Royal Theatre 2 blocks east on Smith Street. Snaper’s involvement was hinted at in an article announcing the contract signing in March: an article closer to opening day mentioned Brown, along with Snaper were the directors of the new theatre. Initially planned to open July 1, The City wasn’t ready until September 2, opening sans the balcony, which hadn’t been completed.

The City’s lobby originally took up the frontage to the right of the building’s entrance, replacing one of the two planned retail spaces and measuring approximately 40 feet long by 25 feet deep. It was finished in marble, mahogany, white enamel and tile. The ticket booth was movable, in pleasant weather it sat in front of the theatre at the property line, moving into the lobby in inclement weather. Stairs led to the balcony from either side of the entrances to the auditorium, which measured approximately 45 feet wide by 125 feet, including the stagehouse. In the clear, the ceiling was 28 feet high, the proscenium arch measured 32 feet wide by 25 feet high, the stage was 20 feet deep from the plaster line to back wall. Only the rear 25 feet of the auditorium were in the Raritan Building, the remainder was an added structure on a part of the property that had been left vacant.

A final comment on the original theatre configuration, the projection booth was originally off to house right, resulting in severe keystoning of the image. I asked Mark Pusillo (last house projectionist) if he was aware of this. He hadn’t known, but mentioned that the exhaust from the old carbon arcs was vented straight out the west side of the building rather than up through the ceiling, the result of there being two floors of offices above the booth. Mark mentioned his father was a projectionist there when they still used carbon arcs and said the one flaw of this exhaust system was that on windy days, the fumes would blow back into the booth and balcony.

The City went dark for the first time at the end of 1917, the last ad appeared on December 29 announcing the show for that day and the next, which would be a Sunday when shows weren’t permitted by law, so most likely December 31. An ad in February offered the piano from the “now closed” City Theatre for sale.

On April 22, it was announced that the management of the nearby Ditmas Theatre had leased the City, which was undergoing renovation and alterations, it would open in the near future. Motion pictures would be the attraction, although it was probable stock companies and the occasional boxing matches would be booked.

The City reopened on May 6th, with a week-long run of “The Kaiser, The Beast of Berlin”, a popular World War 1 propaganda movie. Afterwards the City and Ditmas would advertise together, changing the bill daily and alternating theatres, starting first at the Ditmas before moving to the City. This continued until July 13, when the last films under Ditmas management were presented. On July 15 a Stock Company took up residency, presenting a new play weekly. This went on thru August 28 when their “season” ended. The following three days featured a show by the soldiers at Camp (now Fort) Dix to raise money for their Battalion Fund, after which the City went dark again.

The following March it was announced the City was going to re-open, not only with a remodeling, but a new name: The Liberty Theatre, which would still be be locally owned.

The remodeling included adding two retail spaces, decreasing the length of the lobby by 20 feet and relocating the stairs to the balcony into the auditorium itself. the projection booth was also moved from house right to the center of the auditorium.

The other notable addition was a Wurlitzer costing $10,000, according to pre-opening promo material and opening ads. The Wurlitzer opus list doesn’t have an installation in Perth Amboy in 1919, nor is there a record of an earlier organ being moved there, so opus and size are unknown at present.

The Liberty was short lived, opening on April 25th, its last advertisement was for a show on July 31. It may have remained open longer but after the first few weeks of operation, their newspaper advertisements were sparse.

On September 13th, it was announced in the local paper that a Mr. Kuhn had taken over operation from local interests and, after some touchups now taking place, would open the following week with a new name: The Crescent. While the paper did not give a first name, this was Samuel Kuhn, who had spent the previous 8 years working for the Loew’s circuit, managing its Avenue B and 116th street Theatres.

The Crescent opened on September 19, the feature that day was “The Test of Honor”, starring John Barrymore. Kuhn left the Royal in late 1920.

While operators changed several times, The Crescent kept its name until the early 1950’s when it again fell under the management of David Snaper. Snaper had, over the decades, built his own small circuit of theatres in the Middlesex County area and Staten Island. He changed the name to the Royal, the name of his first theatre in 1911.

Snaper died in 1956 and his son Wilbur took over operation of the Snaper Circuit which, according to the 1955 Film Daily Year Book, consisted of a dozen venues. According to Mark Pusillo, Snaper got rid of at least 3 of his theaters, the Royal being one of them, in early 1969. The new operator according to Mark, was Fernando Bravo. Bravo eventually moved on, the last operator was Howard Green.

I’m uploading a few ads from the Royal, under its previous names.