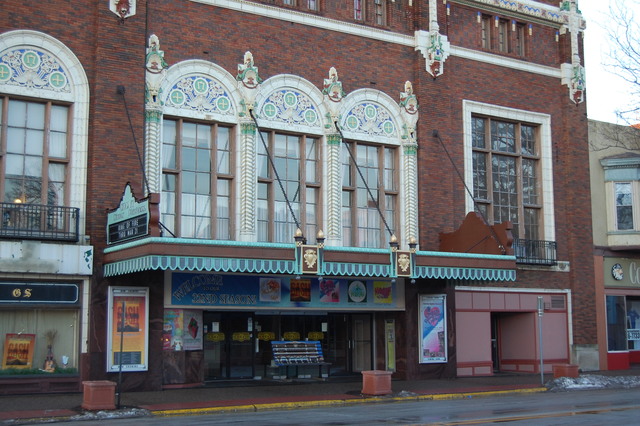 The Fort Theatre, also known as the Fort Armstrong Theatre, is another classic theatre that started off with silent pictures/vaudeville and then switched exclusively to movies. It opened on January 19, 1921 with 1,800 seats.

The theatre was decorated with a Western theme that was in keeping with its pioneer past, including teepee chandeliers. It was closed in 1971 and became an adult movie theatre, which closed in 1973.

In the late-1970’s, Dennis Hitchcock purchased the theatre, terraced the main floor, installed tables, and renamed it the ‘Circa 21 Dinner Playhouse’. Mr. Hitchcock otherwise left the theatre’s color and style as they were.

While the main floor has a small entrance and lobby, there is a large lounge on the 2nd floor.

The Fort is listed on the National Register of Historic Places.

Opened in 1921, the Fort Armstrong Theater was designed by architect Benjimin Horn of the Cervin & Horn practice, associate architect was W.T. Braun. The architectural style is Native Indian and it had a seating capacity of 1623.

I have some memories of this place. This was THE main theater in the Quad Cities. It was strictly first-run. It also had a hotel, which was built a few years after the theater. The Showcase Cinemas in Milan relegated the Fort to lesser status. Had it not been for David Hitchcock, it probably wouldn’t exist today. He turned it into Circa 21 Dinner Playhouse in 1976. The hotel is now a senior citizen apartment building.

The August 7, 1920, issue of The Moving Picture World had a long description of the Fort Armstrong Theatre, then under construction:

“THE Fort Armstrong Theatre, Rock Island, I11., which has been under construction since early March, this year, will be ready for opening about October 20. The structure, which has a frontage of 90 feet on Third avenue and a depth of 150 feet on Nineteenth street, is devoted wholly to a fine, modern picture theatre, with a spacious main floor seating 1,150 persons and a mezzanine balcony seating 850. In conjunction, there will be a smoking room for men, a parlor for women, and a large nursery for children in the basement, also a tea room and a dance salon on the mezzanine floor, adjoining the balcony. The estimated cost of the entire structure, when finished, is $400,000.

“Rosenfield, Hopp & Co., which also owns the Majestic Theatre, Rock Island, is the corporation formed for the construction and control of the Fort Armstrong Theatre. Walter A. Rosenfield, banker, manufacturer, and big business man of Rock Island, who is also prominent in club life and in state political circles, is president of the company; Joseph Hopp, nationally known in film circles as second vice-president of the Motion Picture Theatre Owners of America, and president of the Illinois Exhibitors’ Alliance, is vice-president and general manager; George Schneider, secretary; Charles D. Rosenfield, treasurer, and Joseph M. Quinn, house manager. Mr. Tuinn will also have supervision of the Majestic Theatre management.

“Will Book All Pictures.

“Walter A. Rosenfield, president of the company, served as a volunteer soldier during the Great War, with the rank of major. His regiment was not sent abroad, but was assigned to guard the Mexican border. It was due to his interest in army life and to perpetuate the name that the house has been called the Fort Armstrong Theatre. On the island in the Mississippi, near Rock Island, is located one of the largest U. S. arsenals in the country. On this island old Fort Armstrong, which dates back to the time of the Indian wars in that section, is still preserved by the U. S. government.

“Without enumerating particulars it can be said that the new theatre will include all the latest modern improvements and devices that contribute to the comfort and safety of patrons. General Manager Hopp, who will have charge of all the bookings for the Fort Armstrong and the Rock Is- land, will retain his office in Chicago. All makes will be included in Mr. Hopp’s bookings, without discrimination.

“A symphony orchestra of fifteen pieces will be used in the presentations given by House Manager Quinn. A large organ, specially built by Lyon & Healy, of Chicago, in their Rock Island factory, at a cost of $15,0D0, will support the orchestra.

“The Fort Armstrong Theatre will have a population of over 120,000 to draw from. Close by, in Illinois, is the manufacturing town of Moline, and across the Mississippi, in Iowa, is Davenport. Besides, neighboring small towns and villages will yield their regular quota to view the high class picture programs, presented in conjunction with the most approved musical aids.

“Mr. Hopp states that a big novelty act — either musical, dramatic or specialty, will always precede the feature of the program. Each of these acts will be carefully selected and their stage introduction will be novel, artistic and agreeably impressive.

“The plans of the Fort Armstrong Theatre were made with great care. Many of the leading picture theatres in the Middle West were visited before they were drawn. Cervin & Horn, Rock Island architects, and William T. Braun, a Chicago architect, worked in collaboration. To Mr. Braun, who has made a special study of modern theatre construction, is due many of the practical structural features, which give the Fort Armstrong high rank as a thoroughly up-to-date house.”