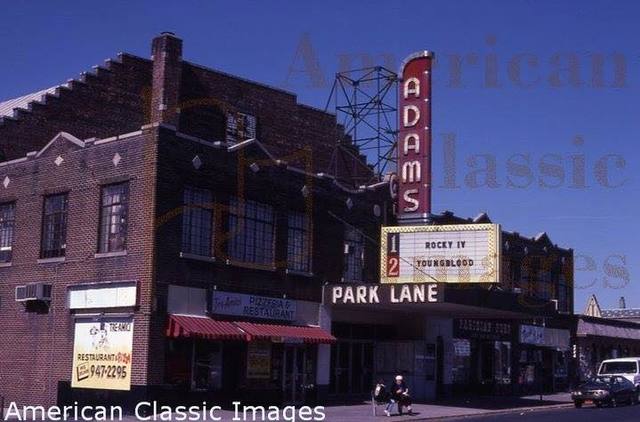 In 1952 the Park Lane closed for renovations. A new air conditioning plant was installed, and the large louvres in the right and left box areas were left with unfinished plaster borders. The seats, we thought 1,500, were replaced with about 1,200 wider, padded seats offset row by row for better visibility. But more importantly, a new, brighter, wide screen was installed for the coming Cinemascope process, and its proportions fit the proscenium arch perfectly (it was made up of vertical ‘strips’ and could ‘fly’ so the stage was useable, for instance, by Leonia High School graduations.) This was when the “Adams” sign appeared outside over the marquee. First run films were Su-Tu and Wed-Sat, with a weekly kiddy matinee every Saturday. The screen was reportedly the largest in Bergen county, and the 1953 opening of “The Robe” in Cinemascope was a spectacular event.

This large house was gutted and is now a three-story upscale mall featuring small shops and restaurants. It is called the RODEO Shops. It features numerous Korean-oriented shops which reflects the demographics of the town.

There seems to be no visible traces inside the building. The exterior of the building, especially the auditorium facing Henry Avenue, was nicely restored.

Really looks well restored from the outside. Was biking down here and you couldn’t help but notice the building. Restaurants and shops with glass facade. If you make a turn behind it on Brinckerhoff, there’s a driveway directly under the stagehouse with a ramp for the parking garage that’s in the stagehouse (the ramp to the top) and it goes back some. Brilliant adaptive reuse. I liked it a lot.

The Palisades Park fire department used to host a variety show at this theather back in the 50’s. One year it was emceed by Merv Griffen. Saturdays were the best for kids with 2 full length features, 10 cartoons, the news and a action serial (superman, batman, 3 stooges etc). That was in another life tho.

I attended this theater several times in the late seventies. I was shocked and pleased that they were still presenting their program like the old days—opening the curtain, running a cartoon (and newsreel?) before the movie.

I grew up in Palisades Park during the 1970s and have found memories of walking down Broad Avenue to the Park Lane Theater with my sister to watch a movie. I think it only cost $1 at the time! There was an elderly gentleman who took tickets inside the lobby and I seem to recall my parents telling me that he had worked there for a very long time. Once you entered the theater, the concession stand was in the left corner and the restrooms were over to the right. I clearly recall how cold they kept the building and the fluffy red velvet seats. What a reprieve it was from the hot, humid summer days. The last movie I saw there was “Saturday Night Fever” in 1977. My family moved to the west coast shortly thereafter and I’ve often wondered what became of the beloved theater of my hometown. After visiting Palisades Park many years later, I was saddened to see how many of the landmarks no longer existed like the A & P, the 5 & 10 next door, the bank on the corner that had a huge clock. At least Donna Pizza, Anthony’s Drugstore, and the awesome Palisades Park Bakery are still there. The Park Lane Theater will always have a special place in my heart!

I grew up in Palisades Park, which was a wonderful place until about the mid-Eighties, when it started to drastically change. No doubt the older gentleman taking the tickets was Mr. Stavrou, who was the manager of the Park Lane for thirty years! He was a wonderful person and was very kind to the adults as well as to the children at the matinees. He had quite a life, beyond the Park Lane, and you can read about him here: http://www.legacy.com/guestbook/DignityMemorial/guestbook.aspx?n=christopher-stavrou&pid=152403746

I graduated from Palisades Park JHS in 1959. I remember Mr. Stavrou’s daughter, Sandra “Sandy” graduated with the same class. She was knock-down beautiful as well as intelligent…she wrote the ‘59 yearbook narrative, cleverly weaving in every graduate…very clever. Whomever she married would have been a very lucky man.

Anybody remember her or of her whereabouts?

To this day I hate the songs “Somewhere Over The Rainbow” and “It’s a Grand Old Flag” as we had to practice them way too many times for our ceremony.

Thanks for the information about Mr. Stavrou. It’s great to share memories from the past, isn’t it? 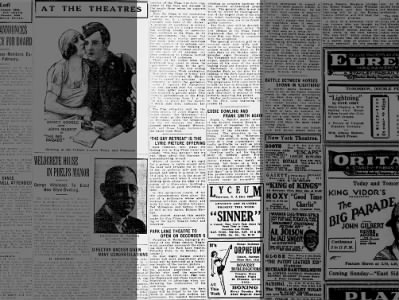