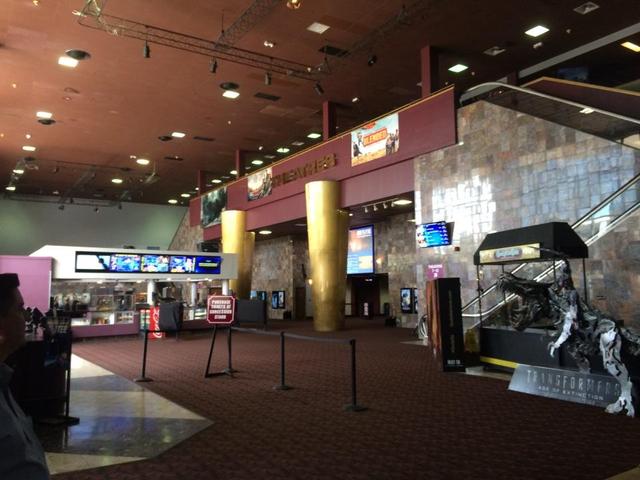 Opened on December 16, 1988, the Ridgefield Park Tenplex (10 screens at the time) was a Loews ‘flagship’ theater (this in the days before ‘Sony’ Lincoln Square) located beside the NJ Turnpike, just five miles south of the George Washington Bridge.

In its early existence, the four-story, one block-square facility’s opening was promoted by way of a charity volleyball game, between staff members of the then-fledgling, all-sports NY radio station, WFAN (the nation’s first all-sports station, which had begun broadcasting at 660KHz just months prior) and members of the NY Giants football team. The volleyball game, which was staged in just half of the theater’s entry level lobby, is evidence of the vast space available in this modern movie ‘palace’. (Further proof was the regulation-sized basketball backboard which was set up in the lobby to coincide with the opening of the 1994 Shaquille O'Neal vehicle, “Blue Chips”. The equipment was then purchased by the theater’s management team, so that it could be utilized by the staff after hours.)

The lobby was more than 60 yards wide and 3 stories tall. The 85,000 square foot facility was Loews' largest theater in terms of seating and was built at a cost of $15 million.

The theater featured brass appointments, marble tile, wooden banisters on the lobby’s staircases, laser shows in the three story alcoves above the exit doors, the nation’s first VideoWalls, and an attractive burgundy and lavender color scheme. Three concession stands, featuring 14 selling stations (which were initially manned by two attendants each), and two box offices served the building’s six first floor and four third floor auditoriums (a projection booth sits in-between), the largest of which seated 900+ patrons. Six other auditoriums seated between 450 and 550 guests each, while the remaining three ranged from 250-270 each. At least two screens were 70mm equipped (#8, the ‘big house’, and #9).

In later years, the 4,802-seat theater was home to two immersive, stand-up virtual reality units, a hydraulically-operated motion simulator ride (the type utilized at amusement parks), and various other (failed) revenue-generating schemes. Despite successful engagements of features such as “Batman”, “Lethal Weapon 2”, “Pretty Woman”, and “The Hunt for Red October”, on February 5, 1993 the cinema’s largest auditorium was tripled, resulting in one 500-seat auditorium and two other seating 195 each.

The theater’s original carpet has since been replaced, as have most of the more lavish fixtures (the brass-finish trash cans have been replaced, the exterior lighting has ceased to be utilized, the lasers long ago fell into disrepair, and the VideoWalls have been replaced with huge aluminum “Loews Cineplex” logo signs). The theater is now a ‘bargain’ house, charging $6.50 for adults (except for Friday and Saturday nights, when the price is raised to $7.00 – sort of a reverse bargain matinee!).

Built on a landfill, as are Loews' other Hartz Mountain-owned Meadowlands properties in Secaucus, NJ, the building has actually ‘risen in stature’ over the years. As the surrounding landscaping, parking, and service roads have been sinking steadily, several steps and extensions to the wheelchair access ramp have been necessary, in order for people to make it from the sidewalk up to the theater.

It was closed suddenly on May 10, 2013, and has been taken over by Starplex Cinemas, who reopened it on September 20, 2013. Taken over by AMC December 16, 2015, recliners seats were installed and the total seating capacity was reduced to 1,200.

Hello, I used to go to this theater all the time and would love to use it in a book I am writing. I believe the one who took the photo is amcbayplaza13. I know it is copywrited but wanted to know how to get in touch with the person for permission. If anyone knows how to, please let me know. Thank you.

Bernard Myerson, president of Loews Theatres, and Eugene Heller, president of Hartz Mountain Industries, Inc. announced that they have entered into an agreement to build a new state-of-the-art, ten-theatre complex in Ridgefield Park, New Jersey at the intersection of Routes 95 and 46.

The theatre will be part of a Hartz Mountain Industries complex which will include a hotel, office buildings and retail stores. Loews presently operates theatres with Hartz in several other areas of New Jersey, Loews Harmon Cove Quad and Loews Meadows six in Secaucus, Loews six in Wayne and a quad, Loews Showboat, in Edgewater.

The new Loews tenplex in Ridgefield Park will have approximately 5,000 seats and is scheduled for a June 1985 opening.

This coming December 16th will mark 30 years since it opened. Why was the project delayed?

That’s a really neat ad. Thanks for uploading it! Shame about that Futurvision & Showscan. I’d never heard of futurvision & tried to look it up. Couldn’t find much. 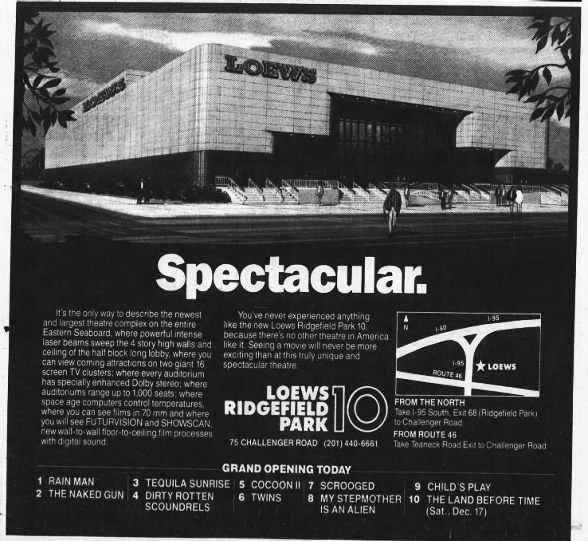 out of all those movies i saw land before time in the theater since i was a bit too young to see the other ones (I would see them later on TV and on VHS and DVD and bluray). Flash forward years later and there would be two sequels to the Naked Gun, too many Land Before Times made for video sequels, and a Child’s Play reboot following several sequels to the film.

Please update 1200 seats. Recliner seats were installed when the bought the theatre from Starplex.