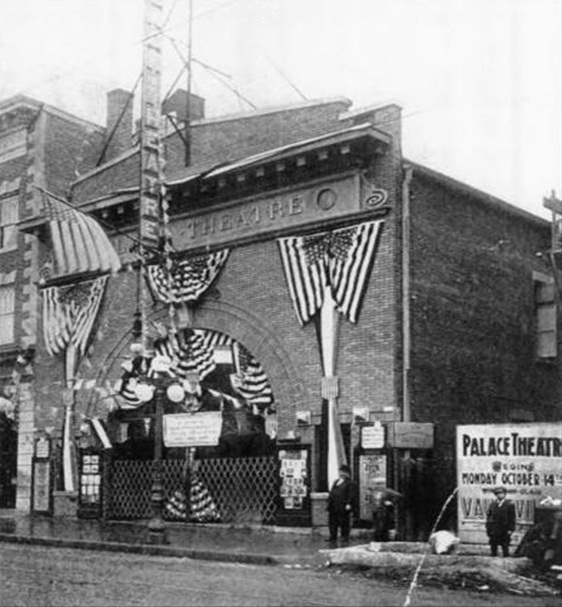 Built in 1910. Purchased by Harry Roth and his brother in 1918. Still listed as operating in the 1951 Film Daily Yearbook.

Some movies shown at this theater in 1921:
Palace Theatre (Morristown, NJ)

A survey of prices from the Daily Record, February 1-15, 1915 indicates that this theatre was presenting “Supreme Vaudeville,” at .10-.25/ticket

I remember going to Saturday matinees at the Palace in the early 1950s. Kid’s price was 14 cents! They showed a lot of westerns and many of the “Abbott and Costello Meet [pick your monster]” movies.
Blacks were made to sit in the balcony, and we white kids were terrified to sit forward of the balcony for fear of bering spit on or worse. How sad is that?

After the theater closed (guess around 1955), the building became a Roth and Schlenger (R & S) auto supply store for many years, and eventually became Winston’s Toy Store that lasted well into the 1990s. The building was finally torn down and is now (2007) the site of construction of a large residential building.

The Palace was sold at auction to Dubonet Realty Co. of Newark for $34,210 late in 1951, according to Boxoffice Magazine, December 15 that year. The house had been owned by Walter Reade. The building’s contents, including projectors, amplifiers, seats, and other furnishings, were sold to SOS Cinema Supply Corp. for a mere $210.

A history of Morris County published in 1914 included a biographical sketch of Antonio Esposito, an Italian immigrant who built and operated the Palace Theatre. It says the theater was opened in 1910, and that Esposito had opened an earlier movie house on Park Place in 1907, which he operated until opening the Palace.

Here is a link to the biography, and here are passages about the theater:

“Energy, enterprise and perseverance have been the main attributes in the success which has attended the well directed efforts of Antonio ESPOSITO, proprietor and manager of the Palace Theatre, located on Speedwell avenue, Morristown, erected in 1910 and opened in that year, which is considered one of the finest miniature playhouses in the State of New Jersey, having a seating capacity of 700, and equipped with everything needful for the comfort, convenience and safety of its numerous patrons.

“During the winter season, in addition to moving pictures, which are of a high class, there is a vaudeville performance, which is the best that can be obtained, nothing of an obnoxious character being allowed on the boards, thus insuring to the ladies and children who patronize it a clean show in every way with nothing offensive to their senses or morals, and during the summer season, in addition to moving pictures, there is a stock company which furnishes a fine repertoire of the best plays portrayed in an excellent manner. This brief statement of facts proves conclusively that the Palace Theatre is conducted on the best known lines, and is worthy the patronage of the better class of residents, the constant aim of the proprietor being to make it rank among the leading amusement places of the county.”This lavish encomium is followed by the news that:

“Mr. Esposito is now, October, 1913, beginning the erection of a new and more commodious play house to be located immediately in the rear of his present play house, it will have a seating capacity of 1,641 and standing room for 400 more. The theatre will be constructed along the lines the most modern, and where the best talent can appear and feel at home. It will be called the Morris Theatre.”

I’ve been unable to discover if Mr. Esposito’s 1913 project was ever completed, but it seems unlikely that it was. I’ve been unable to find any references to a Morris Theatre prior to the 1960s, and that one appears to have been a different theater housing a local community theater group.

My grandfather Charles Meys was the organist at the Palace in the 20’s. My dad Tom and Uncle Bud say that he was a “superstar.” The kids would wait anxiously in the house until he appeared at the door. As soon as he started walking down the aisle they would cheer: “Mr. Meys is here! Mr. Meys is here! The movie can start now!” My uncle was only a toddler at the time but has a faint memory of sitting by his father’s side as he improvised amazing scores to enhance the films.

My grandfather is the inspiration for my doctoral dissertation at UNC Greensboro: Sounds of the Silent Cinema Organ Recalled in the Life and Work of Firmin Swinnen. Through my research and writing I hope to capture some of those sounds of the improvised organ that were lost to time.

Does anyone know what kind of organ the Palace had? I imagine it went the way of almost all instruments when the theatres were demolished (insert VERY sad face here). I know that my grandfather played an Aeolian at Morristown High (that, thanks to alum Bruce Courter survived demolition)because I have a photograph of him playing that instrument.

To add a little about Charles Meys, he was still playing at Morristown High School and was on the faculty when I was there from 1962 to 1964. Bruce Courter had removed the Aeolian Residence Organ from the upper right Chamber and it was turned into a AV room. At the time, Bruce installed it in his fathers house which was just a few doors down from the HS on Early Street.

The school purchased a Allen Organ and installed it in the auditorium. It was hardly a replacement for the pipe organ, however Mr Meys played it often for school assemblies and programs. We were all aware of his role as a theatre organist and can now say all these years later that he passed some of that on to me. I continue to play several silent movies a year in various theatres.

The Aeolian Organ was not built for the high school, but rather the home with the long fountain next to the Community Theatre. That became the city hall. The story was that the owner of the home donated the organ to the high school when it was quite new, some time in the 1920’s . There was a player action on the organ that could allow it to be played by paper rolls.

Bruce and I did a lot of work on a very large Aeolian residence organ in the Twombley Estate after it was turned into Farliegh Dickinson in Madison. That organ was twice the size of the MHS organ and had two player systems, one in the console and one in a cabinet to the left of the console. It was unfortunatly removed some time ago. Today there are still some Aeolian Residence organs in the mansions they were built for and are highly prized. Just like the destruction of so many theatres, you don’t know what you got till its gone !

Having traveled to MHS for my 50th reunuion last fall, it was wonderful to see that there is a plaque for Charles Meys in the main hall.