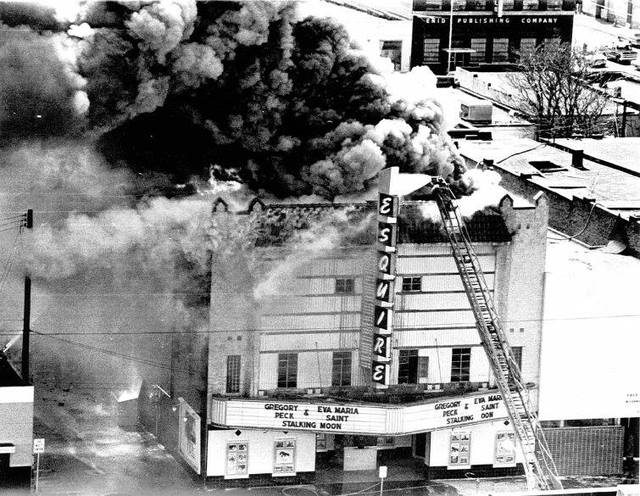 The Aztec Theatre was opened on January 9, 1928. It was operated by Griffith Amusement Company. It had 1,850-seats and was equipped with a Hillgreen, Lane & Company theatre organ. It was rebuilt and reopened in January 1951 as the Esquire Theatre. In March 1969 it suffered damage from a fire. It reopened and continued to operate until 1980.

Not to quibble, but both of the links in the 10/07/07 posts are coming up as dead links for me so I’m not sure what they showed when the posts were placed on the Cinema Treasures site. The person who originally made the comment about “the Cubist style building with the green awning” in the 03/08/11 post mis-identified the location of the Aztec. The street view that comes up is looking north toward the opposite side of W. Randolph which would be across the street and a bit to the west from the correct location of the Aztec. The only theater located on the north side of West Randolph in that block was the Arcadia at 226 W. Randolph. And the only link to the Oklahoma Historical Society (01/27/07) shows seven photos when the phrase “Aztec Theatre” is typed in. Four of those photos are of the Aztec in Enid and the exteriors are showing the building that was located at 213/215 W. Randolph. The other three photos are of the Aztec Theatre in Vinita, OK. I have been to the Oklahoma Historical Society archives in Oklahoma City and will be going back again. If I find additional information that contradicts or clarifies anything I’ve posted, I will happily share it. My desire is to present the most factual account possible of the old theaters in my hometown. Thanks for all of the great information being shared!

To Mike Marshall. In case you may not have these, the Margaret Herrick Library at AMPAS has in its B'hend & Kaufmann Collection two 8 x 10 negatives of the Aztec (“Rose Marie” playing) and Esquire(“Sodom and Gomorrah”) exteriors and two of the auditorium, depicting a band on stage, and the rear of the auditorium. Contact .

Thanks, Robert! I’ll check it out. I sure appreciate everyone who has shared information about the Aztec/Esquire. We’ll have a definitive history yet!

The Aztec Theatre is not on David and Noelle Soren’s list of known Boller Brothers theaters, though the list does include Enid’s Billings Theatre, opened in 1921. A December 30, 1930, article about the La Nora Theatre in the Pampa Sunday News-Post of Pampa, Texas, mentioned the Aztec Theatre in Enid as one of the other theaters designed by Gates Corgan, architect of the La Nora. Corgan was both the architect and the contractor for Griffith Amusement company projects from the mid 1920s until 1939.

Also a 1969 fire photo of the former Aztec as the Esquire courtesy of the Enid Oklahoma Old Post Cards Facebook page.

The recent opening of the rebuilt Aztec Theatre as the Esquire was noted in the January 13, 1951 issue of Boxoffice.