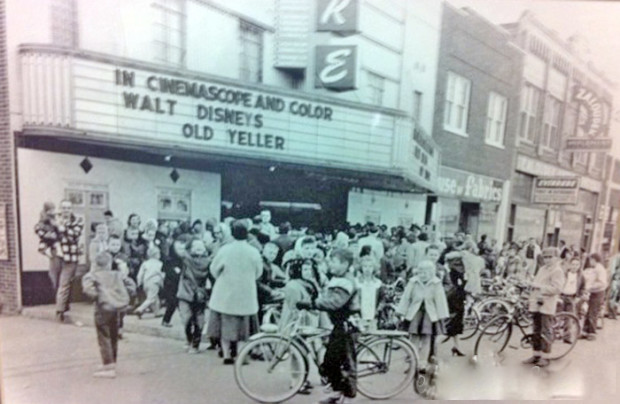 Built in 1969, to replace an earlier 1,147 seat Esquire Theater, which burnt down in March 1969. In 1987 the Esquire Theater was housed in a dark red corner brick building. "Esquire" was spelled out with black letters on large individual white squares attached to the top front of the building.

Under the lettering was a typical pointed marquee and an overhang sheltering the entrance.

The Esquire Theatre in the photos dates from late 1969 or early 1970. It was built for Video Independent Theatres to replace an earlier Esquire Theatre which had been destroyed by fire on March 9, 1969. The new Esquire was the subject of an article with several photos in the Modern Theatre section of Boxoffice Magazine, February 16, 1970.

Boxoffice does not state explicitly that the new theater was on the same site as the old one, but it’s strongly implied by a quote from a Video Independent executive saying that the new house had only 500 seats, compared to the old Esquire’s 1100, partly because the new house was on one floor while the old theater had had a balcony.

This is what the old Esquire Theatre looks like these days,
View link
This link has a photo (30 down) of the first Esquire Theatre, designed by Carl Boller. This was sister house to the Bison Theatre in Shawnee, OK. There is also a shot of the new Esquire taken shortly after it closed,
http://www.enidbuzz.com/downtownenidvintage.htm

Original name for the Esquire Theatre was Criterion. Then it was renamed Aztec before being known as the Esquire.
To see vintage photos of this theatre building under various names go to below link, in match all words field type in either “enid theater” or “enid theatre”,
View link

Boxoffice Magazine’s 1970 article about the rebuilt Esquire, cited in my earlier comment, can be seen at this link.

This was a fairly new theatre in downtown Enid during the era when I lived there. Good sightlines and sound.

I’m really disappointed that most of the links to the photos above have been disabled. I was looking forward to seeing them. I lived in Enid from the early forties till 1956. I worked as Doorman, briefly in 1953, at the first Esquire (though it may have still been the Aztec). Two things come to mind that might (or might not) amuse some Enid residents: 1) Mr. Shipley the manager allowed me to write my own script for the marquee that I put up on Saturday afternoons. My pride and joy was “Esther Williams is / Dangerous When Wet in/ MGM’s splashy new musical” and 2) I was still at Longfellow when I worked at the Esquire, and some high school bullies took the book I was reading and threw it up on the Marquee, where it stayed till a friend helped me rescue it. The book was my much valued copy of James Joyce’s Ulysses in the Modern Library edition.

Here are fresh links to the February 16, 1970, Boxoffice article about the new Esquire Theatre:

Went to this movie theater alot growing up. Saw alot a Disney movies here. Old ones like Bambi and snow white..but then current ones (1970s)like Petes dragon and candleshoe. I remember watching the movie Dune here. Seems like it closed down not long after that.