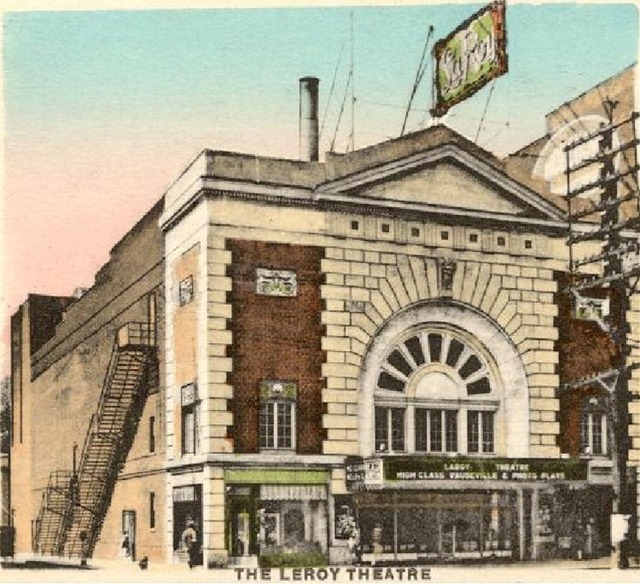 The largest and finest vaudeville theatre in south-central Ohio, the LaRoy Theatre in Portsmouth, Ohio, was a joint venture of two local businessmen: Simon Labold and Thoms Conroy.

The LaRoy Theatre opened January 11, 1926 with “high-class vaudeville” and silent films. In the summer of 1928 it was taken over by the Schine Circuit Inc. By 1941 it was operated by Warner Bros. Circuit Management Corp. The theatre was the entertainment showplace of the region until it closed in 1973 for a street-widening program. The final film was “Gone With the Wind”.

On 1/18/43, “Rise and Shine” with Jack Oakie and Linda Darnell was playing at the LaRoy. The other theaters in the Portsmouth area at the time were the Eastland, Westland, Strand, Lyric, Warner’s Columbia, Garden and Stanley.

Thank goodness for street widening (he said sarcastically)! Portsmouth may have lost a viable downtown business, but now people can drive down the block 4 tenths of a second faster!

This web page has photos of several Portsmouth theaters, including the LaRoy about halfway down the page. A list at the top of the page gives the LaRoy’s address as 848 Gallia Street.

The August 1, 1928, issue of the Portsmouth Daily Times said that the Schine Theaters Circuit, which had recently acquired the LaRoy, Lyric, and Columbia Theatres, would install new and improved lamps in the projectors at all three houses.

The LaRoy Theatre opened with a three-manual Bennett organ, opus 952. The fate of the instrument is unknown at this time.

The January 12, 1926, issue of The Portsmouth Daily Times had an article about the opening of the LaRoy Theatre the previous night, and said that architect Laurence Millspaugh was among the speakers at the event. The November 19, 1924, issue of the same publication had said that Columbus architectural firm Carmichael & Millspaugh had been chosen to design the new theater to be built at Gallia and Gay Streets.

The firm was founded shortly after WWI. Martin Laurence Millspaugh retired from architecture in 1932 to take over operation of his family’s business, Baltimore silversmiths Samuel Kirk & Son. Carmichael & Millspaugh also drew the plans for the 1926 remodeling of the Robey Theatre in Spencer, West Virginia. I’ve been unable to discover Mr. Carmichael’s first name or initials.

Boxoffice, March 11, 1974: “The LaRoy Theatre recently was demolished to make way for the widening of Gay Street. Through the efforts of the Portsmouth Arts Council, some irreplaceable ornamental sections of the vintage building were salvaged.”