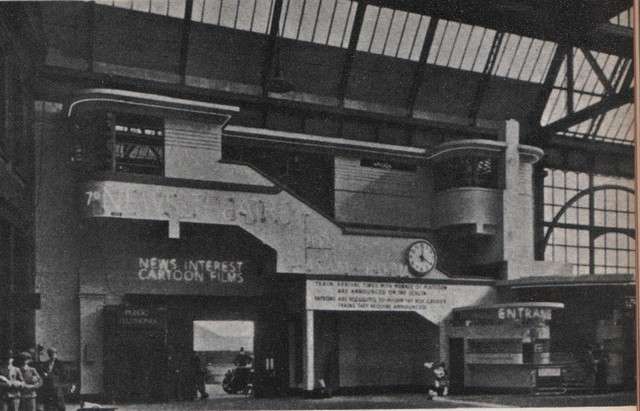 Built for and operated by Capitol and Provincial News Theatres (later to become the Classic Cinemas chain), the News Theatre Waterloo Station opened in the late-Summer 1934 and it was open daily from 9am until 11pm. It was the second newsreel theatre to be opened at a mainline railway station in London (Victoria Station had the other which was opened a year earlier, also operated by Capitol and Provincial).

Located at the end of the main concourse of Waterloo Railway Station beside the entrance to Platform 1, the facade was a striking example of Art Moderne style with sweeping curves and stylised 1930’s Deco signage. The paybox was at concourse level and patrons walked up an open staircase (the railway station roof protected from the elements). Inside the auditorium its most unique feature was the projection system that was acheived by having the projection booth up in the centre of the ceiling and beaming the picture onto the screen via a series of mirrors (in later years a conventional screen and projection system was installed). The cinema had no toilet facilities and patrons had to ask permission for a pass-out to go to the public toilets on the railway station concourse.

In the late-1950’s the News Theatre went over to screening one hour long continuous programmes of cartoons but later in the 1960’s went over to screening double bills of old Hollywood ‘classics’, and it was re-named Classic Cinema Waterloo. It closed on 14th March 1970 screening a double bill programme of Hitchcock’s “Torn Curtain” and “An Inspector Calls” and lay empty for 14 years until it demolished in 1988.

Featured in this 1944 short film: London Terminus. The whole thing is worth a watch, but the scenes with this cinema start at around 2:40 in.

I always thought that “news theatres” at main line stations was a great idea, because the entire programme including, short and cartoon was over in 60 mins.

By the time I first visited this cinema, it had moved on to double features. I had just missed my train and instead of waiting for the next one, I watched “The Sand Pebbles”, not being aware that the film was over three hours long. I was supposed to be visiting a friend in hospital in Epsom. I eventually arrived at my destination nearly five hours late.