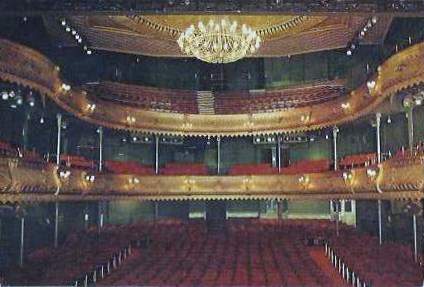 Built on the corner of The Cut and Waterloo Bridge Road, close to Waterloo Railway Station, near the south bank of the River Thames. The Royal Coburg Theatre was opened on 18th May 1818. It was designed by architect Rudolph Cabanel of Aachen. It was re-named Royal Victoria Theatre from 1st July 1833.

Reconstructed to the plans of architect J.T. Robinson in 1871, it reopened as the New Victoria Theatre. In 1874 it was re-named Royal Victoria Palace Theatre and in 1880, after further alterations it became a Temperance music hall (no alcohol allowed). Films were being screened from 1910 as part of the music hall programme and continued after Lilian Bayliss took over the management of the theatre in 1913. Full time cinema use ceased around 1915.

Lilian Bayliss then instigated a policy of Shakespeare’s plays, which proved successful. The theatre was renovated to the plans of architect F.G.M. Chancellor out of Frank Matcham’s office in 1927. The seating capacity was 1,454, in stalls, dress circle and balcony. The dress circle and balcony are in a horse-shoe shape, supported by iron pillars. The stage is 30 feet deep.

In 1941, the Old Vic was damaged by German bombs, and remained closed until repairs were carried out in December 1950 to the plans of architect Douglas W. Rowntree. In 1963, it became the temporary home for the National Theatre under the direction of Laurence Olivier.

In recent years productions staged have included "The Corn is Green" starring Deborah Kerr in 1985, and "A Christmas Carol" starring Patrick Stewart. In 2003, Kevin Spacey was appointed artistic director of the Old Vic Theatre, a position he held until 2015. Following his departure a scandal errupted regarding his sexual misconduct against male members of staff and actors during the time he was artistic director.

History, memorabilia and photographs of the Old Vic Theatre:
http://www.arthurlloyd.co.uk/OldVicTheatre.htm

A couple of photos of the interior of the Old Vic here:–

@ tinseltoes… Lilian Bayliss Who was noted for being careful with money. Even known to charge actors to act on her stage. (My type of woman) To Balance her books.. BY Showing films during her time.. She Kept the Theatre Open.. Lilian Bayliss Stories… She used to do her office work in one of the boxes during performances even typing, which drove actors mad.. Just before the end of the play she would start cooking food for the cast on a gas ring in prompt corner.. (My Drama teacher worked for her)
British Theatre have a massive debt to her.. Her Opera company based at “The Wells” became “The English National Opera” “Sadlers Wells Ballet” became the “The Royal ballet” “The Old Vic company” Became the National Theatre" She was a remarkable woman..

Yes, I agree. Lilian Bayliss was a remarkable woman, a real leader and doer. She was in the right place at the right time. I recall reading about her way back in the 1950s in, perhaps, the NY Times theatre section, or maybe in Theatre Arts Magazine.