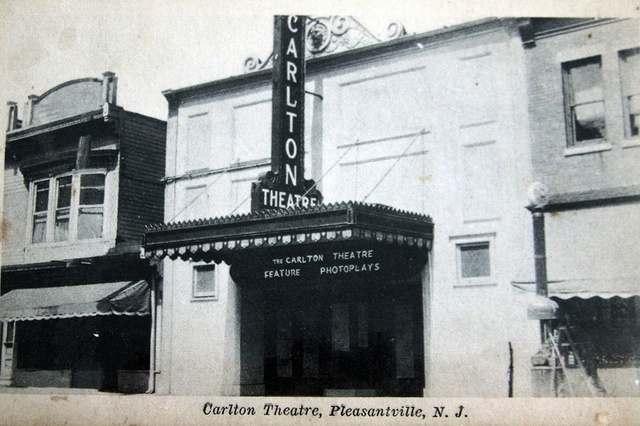 I didn’t know about this one. I think if it was still open in the sixties I would have gone there, or at least heard of it. It looks like it was near the intersection of Main and Washington. Smaller than the Rialto, I think, if you compare the seat counts.

It was before my time, but the building was still there in the 70’s. It was accross the street a little from the Rialto. I think that it was a liquior store?

I went to the Carlton before it closed. They featured low-budget westerns, at least at the kids' matinees. At one point, probably early ‘50’s, they put up a sign saying they were closing for renovations, but never reopened. — There was also a Park Theater in Pleasantville on South Main Street near Frambes Ave, which was converted into a Jehovah’s Witness Kingdom Hall.

I guess it was a closed building for a while, with no clue that it was a theater. Too bad I missed that one.

Specifically, the Rialto was south of Washington Ave, next to (south) of the Mainland Bank, which was on the corner of Main & Wash. The Carlton was north of Washington on the opposite side of Main St. The liquor store (which is still there) is a couple doors further north.

Right, because directly across from the Rialto is a cemetery that has been there for as long as I can remember.

Sorry Ken. The Rialto was on Main Street. The cemeteries are several blocks west out Washington Ave. I still get down to P'ville regularly to visit family.

I left P'Ville in 1958 and the Carlton had been closed for several years by then. We kids used to use the old projection room as a hangout.

Great photo! As late as 2001 or so it was a photo studio, with original ceiling and offices above the box office area.

Opened by Frank B. Hubin in 1912 for $25,000 as a silent photoplay house, the city directory listed it at 7 North Main Street in Pleasantville . The 625-seat cinema was renamed the Carlton Theatre in 1929 and would became a Warner house.