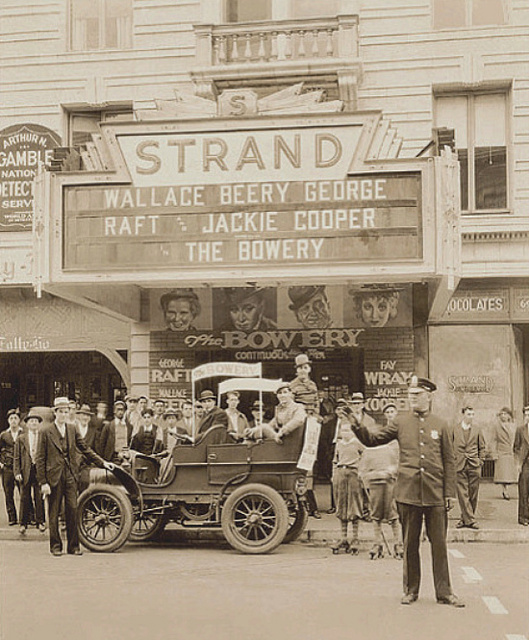 In 1885, the Burlington Arcade Building at 73 Atlantic Street was completed. It is the current site of the Kiwanis Park, adjacent to the Palace Theatre.. The Arcade Building was a glass-enclosed “shopping center,” which housed many of Stamford’s most exclusive stores. The Arcade Building was also home to the Strand Theatre, which opened its doors to the public on December 11, 1914. Mrs. Mary Vuono managed the 400-seat theatre for six years until her husband Mr. Charles D. Vuono stepped in and purchased the entire building, giving Mrs. Vuono the control and artistic freedom she had been holding back for years.“[2]

The Stamford Advocate reported on July 20, 1920: “A real estate deal involving more than $200,000, and the largest transacted for years, was consummated this morning, with the sale of the former Stamford Opera House and the Arcade Building to Mrs. Charles D. Vuono, proprietress of the Stamford Theatre.”

With this mega real-estate purchase, Charles D. Vuono had given his wife Mary total control of The Strand Theatre, which she was managing at the time, and of the Grand Opera House building, which would later become The Palace Theatre directly next door. Mrs. Vuono didn’t waste any time in making improvements to her newly acquired treasures.

On February 23, 1921, plans for alterations to the Strand Theatre were approved. It was going to be expanded from a 400-seat house into a house seating 1,400 people, by the addition of a balcony and extension to the rear of the building. The new Strand Theatre opened its doors on November 23, 1921 with the motion picture, “The Old Nest.” With the success of the Strand Theatre, Mrs. Vuono engaged Thomas Lamb as the architect to design and build the Palace Theatre directly next door, where the Grand Opera House once stood.

The Strand was next to the Palace Theater. It was the first building to the left of the Palace. Yes, two theaters and two Marquees right next to each other. It was demolished in the late 60’s I think. A small open air park with a fountain was built in it’s place. Lady Byrd Johnson dedicated the park. When the Palace was expanded several years ago, the park was removed, and the space is now a walkway which leads over to the Majestic Theater on Summer St. ext. In the mid 60’s, when the theater was closed but still standing, I walked thru the front door, which lead to a hallway. The theater was to the left, much like the old Plaza Theater setup. It was too dark to make out any detail in the theater.
Al Cooke

Here is a 1950 photo of the Strand and the Palace:
http://tinyurl.com/qguh2

The Strand opened in 1917 according to the Stamford City Directory at 71-73 Atlantic Street. In 1922 it’s known as the Strand/Burlington Arcade at the same address until 1925. Last listing is in 1951.

The following item about an addition to and major remodeling of the Strand Theatre and Burlington Arcade appeared in an issue of Engineering News-Record in July, 1921:

This article from the March 19, 1923, issue of The Norwalk Hour tells of a fire that partly destroyed the Burlington Arcade building in Stamford and says that it was “…adjoining the Strand theater building.” The last paragraph says that the building had once been known as the Opera House block.

This New York Times article from January 5, 2003, is about the adjacent Palace Theatre but mentions the Strand. It says that Mary Vuono rented space for the Strand in the Burlington building in 1915, and bought the adjacent property where the Palace was later built in 1920. Putting this information together with the other sources I cited suggests that the Palace site, which had once been occupied by the Grand Opera House, which burned in 1904, was the site of the 1921 project, and that it was that 1921 addition which was destroyed in the 1923 fire. The Times article says that Mary Vuono hired Thomas Lamb to design the proposed Palace Theatre in 1924, which would fit the time frame of the 1923 fire.