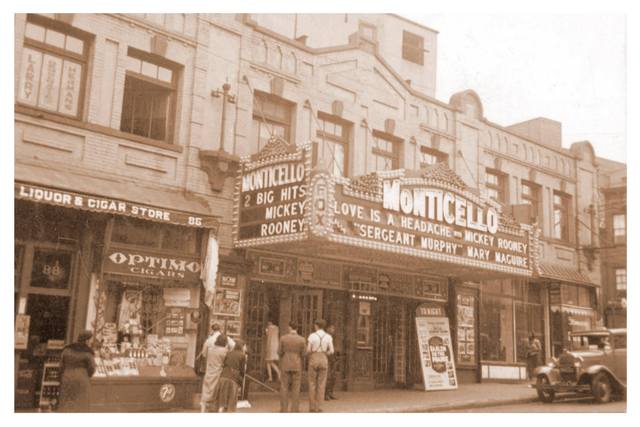 “Jersey City: In Vintage Postcards”, page 92, has an old postcard image. States that theater was built ca 1910 and became a church in ca 1960.

In between being a legit theatre and a church it was an adult theatre. It was billed as “Jersey City’s most unusal theatre.” That started an uproar. The Catholic Church’s Legion of Decency went into action with pickets outside the theatre. Sermons were devoted to this Sodom and Gomorrah here in Jersey City(kind of ironic on two levels). No one was safe from this menance.
The City at behest of the Church would close it on some violation. It would reopen, be closed again and so on.
Around the corner on Communipauw Ave.was a police station. The two buildings were next to each other. They sometimes park would a police car in front of the theatre (in th bus stop)as an attempt to intimidate future patrons. When the #8 Jackson Ave. bus stopped in front. People would look away for fear of corruption and being turned into salt. Others would sneak a peek at it(myself included as a teen).
It was soft core porn, mild by today’s stndards. The ads in The Hudson Dispatch and The Jersey Journal were tame. No graphic pictures only a silhouette of a female form and some info about the film.
I any event it closed due to harrasement and lack of business. I was never inside since I was too young. Then it was converted to the church in the 80’s.
The area has seen better days. It was at one time a thrieving shopping area. There was also a nice mix of residential housing. The area has had bad times for over 30 years. It is a pity the City does nothing to revive the area. On the other hand, if they did do something; the theatre in all probability would be gone.
It is important that we preserve these gems. They each have a unique personality. They are part of our cinema history.
There was a sister theatre in Newark N.J. about 20 miles away. Same ads etc only a different name and city.
Michael

i used to sell newspapers in front of this thhere also in the sixties. it was all closed up by then, and people used to in it to urinate. was a bad nehborhood by then

Ah, growing up in JC! Certainly confer ALL that skin4ever says. I grew up on Bergen Ave (later Arlington) and, as a child, my dentist was just across the street from the Monticello. However, once in Greenville, I used to go the Fulton as a kid. Anyone remember that place?

Anyway, years later I eventually became a p-t film history teacher and lecturer. When teaching at Montclair, I used to bring the students to THE Stanley. That would give them a real sense of what theaters really looked like ‘back in the day.’

Of course, that place was also changed into a church. however, the structure MUST (due to historical preservation reason) be kept intact! so, if you ever want to see a super movie palace – Italian Grotto setting with a sky, stars, and MOVING clouds one needs to head to that place. it is a Jehovah’s temple at this point. So, one needs to listen to the lecture and the Statues are covered, but the grotto look is still there and the sky images are still present.

Now living in NH, nothing really like dear ole' JC Theaters. a few old ones and there is Silent Festival. I don’t run it but do attend!

Bobby Harron, Blanche Sweet, and Lillian Gish would be proud!

The Monticello Theatre was one of the houses discussed in an article about Jersey City’s theater is the January 4, 1919, issue of The Moving Picture World:

“Located in the residential district of Jersey City at Monticello and Communipaw avenue, in the Hill district, we visited the Monticello, 900 seats, in orchestra and balcony. The manager, Harry De G. Robertson, is a man of considerable personality and runs his theatre in good form and has established a strong patronage. Although we happened in during the afternoon there was a comfortable attendance of fine character. The Monticello is not of the most modern architecture and construction, but it has a good organ, projection and courteous attendants.

“Jersey City has a varied population, more particularly noticeable in the Hill section. It is a ramification of fine residences, tenement sections and small store neighborhoods running into each other. To run a theatre like the Monticello, which caters to the old residents as well as attract the better class of the tenement dwellers, requires the best kind of management. Mr. Robertson is evidently the right man in the right place.”The March 4, 1916, issue of the same publication had this item:

“Managers Harry De G. Robinson and Edward H. Burns of the Monticello theater, Monticello and Harrison avenues, Jersey City, were the recipients of hearty congratulations during the observance of their second anniversary week.”As the headline says “Monticello’s Anniversary” I’m assuming it was the anniversary of the theater itself and not merely of the management team, which means (leaving some time for delay in publication) the house probably opened in February, 1914.

A Monticello theatre opened on November 4th, 1910. An article in the photo section. Was this the same one reported as open in February 1914?

The Monticello Theatre appears on the 1911 Sanborn Map for Jersey City, volume 6, sheet 32. It can be viewed here.

Definitely looks like the same place, so a 1910 opening, then. Robinson and Burns must have merely taken over operation of the house in 1914.

I found a mention in the October 22 1910 issue of Variety (A String of Four) that the Monticello had opened the previous Monday, which would have been October 17. It was built and opened by the Ansbach Improvement Co., who leased it the following January to Morris S. Schlesinger for 10 years.

Here is an item about the Monticello Theatre from the August 13, 1910, issue of The American Contractor:

Architects Frederick P. Hill and Edmund C. Stout designed a number of significant buildings, though some of their best have not survived. Among the best knows survivors in Manhattan is a 1913 Gothic Revival style office block on Madison Avenue at 41st Street which has since been converted into the Library Hotel. As far as I’ve been able to discover, the Monticello was the only theater they designed.