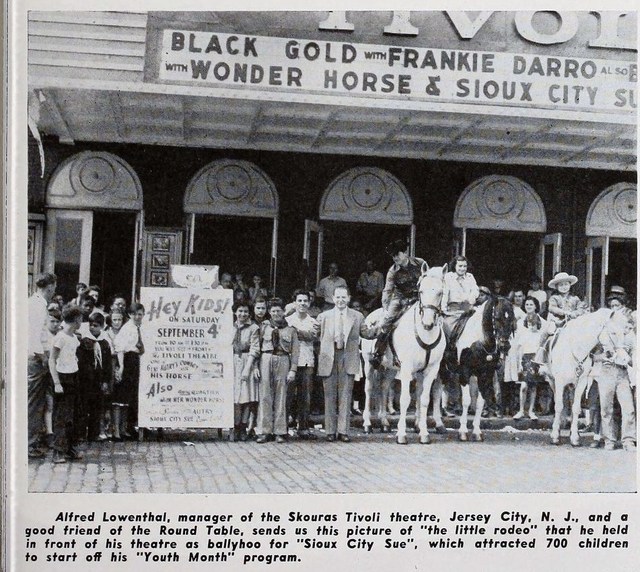 Work executed by my great grandfather (Arthur Brounet) included the Tivoli in Jersey City. Only other info I have is Owner: Lincoln Union Theatres, Inc., and the architecht was Eugene DeRosa.
bobmarshall

Nothing left of this one. Google maps show a car wash and parking lot at this site.

In the 1930’s and ‘40’s, my mother and grandmother used to go to the Tivoli. Their home was a few blocks away on Grand and State Streets. They owned a general store and were famous for making home made Italian ices. My grandmother brought the recipes frm Naples. I have them in a handwritten cookbook of my mom’s as my grandmother could not read nor write.
When I was young they would tell me stories of life in Jersey City and Italy. Children listen to the stories your elders tell you. When they die the chance to learn from them is lost. I benefited greatly from their stories and am sure there were many other things I could have learned from my relatives.
Back to the Tivoli. I remember the site as an empty lot. That was around the 1970’s and '80’s. I moved to San Francisco in 1985. The area was called “The Junction.” Because, six streets met at that intersection. On the corner of Ocean and Communipauw Avenues and Randolph Street was Brummers Ice Cream Parlor. It was across the street from The Tivoli. They made their own ice cream and chocolates. At Eastertime it was a chocolate fantasy land. I went there for bunnies etc. as Easter gifts.
After the movies, people would go to Brummers for a treat. Long after the Tivoli, Brummers still had a sundae called the 'Tivoli Flip" on their menu. It was a double sundae. I don’t remember what ingriedents went into it. Well, that is all I remember of te Tivoli.
Jersey City had a large number of theatres. I remember going to or knowing of the following houses. They were The Stanley, Lowe’s, State, Central, Pix, Palace, Majestic (burlesque), Monticello (later a straight porn theatre), Fulton and a square box duplex. In Jersey Cityese the Lowe’s was pronounced “Lo EEs”.
Michael

i used to sell newspapers at the juntion , and remember that thetre , but it was alreay closed by the sixties. very dangerous place even then.

does anyone know if brummers is still open? great ice cream and chocolates.

This opened on November 15th, 1920. Grand opening ad in the photo section.