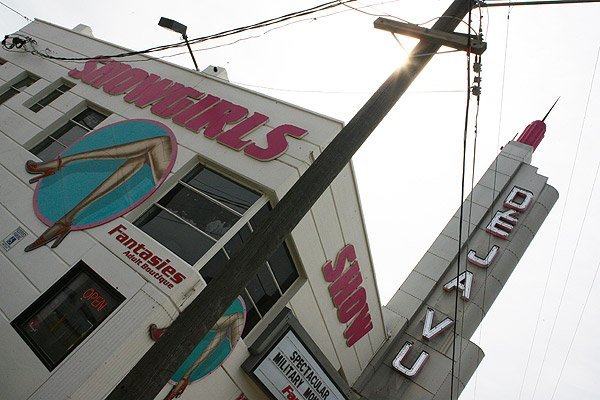 The 1970 IMPA lists the East Sprague and Dishman Theaters, and says both are in Spokane. The two theaters were part of Favorite Theaters, Inc, and were operated by J.J. Rosenfield. Here are the Favorite theaters at that time, all listed as being in Spokane:
Post, Garland, East Sprague, East Trent, North Cedar, West End, Dishman.

Ken mc got the list of Favorite Theatres in Spokane right, but the East Sprague, East Trent, West End, North Cedar were all drive-in theatres.

The Dishman was (as far as I recall) owner operated until the late 1960s, when Favorite gave it a remodel job and turned it into a first run Hollywood big deal cinema. I remember we played Billy Jack there for months (I was occasionally projectionist there at the time).

A new UA twin was built not too far west of the Dishman, and I think around that time Dishman became an X rated house. That was the time when single screens were being phased out in favor of twins or triples. Favorite Theatres was purchased by Sterling Recreation Organization, from Seattle, around this same time.

The Dishman Theatre was unremarkable, a good example of small town theatre construction but plain, and overall a good place to see a movie.

There is a July 1983 ad here from the Spokesman-Review:
http://tinyurl.com/yerwcum

Any ideas on the basis for the Dishman name?
Also, it’s funny to see the 1984 photo with the gun store sign on the side of the building. Since the Dishman blade itself actually looks like the barrel of a Glock.

Oh…duh, A.T. Dishman. Guess I should read ALL the past posts first.

In the mid-‘80s I interviewed one of the surviving members of the Dishman family for the Spokesman-Review — and he told me a story that definitely didn’t make the paper. He said that when the Dishman Theater opened, the downtown theater owners went into a rage. There were quite a few theaters downtown, and this was the first Spokane-area theater to be built outside the central city. The newspaper (actually newspapers — the morning Review and the evening Chronicle were under the same ownership) was clearly aligned with the downtown interests. And at least at first, he said, the paper wouldn’t take advertising for the Dishman Theater. True? False? In an era when it has become easy to look at old newspapers online, I suppose it would be easy to check out the story, should any ambitious soul wish to try…

Certainly it wasn’t true in the mid-70s. Suburban sprawl had made the Valley an integral part of Spokane. The Dishman was a mainstream moviehouse, and its ads ran in the paper like any other. I remember seeing “American Graffiti” there, and “Man on a Swing,” and “The Sting.” But in 1975, I believe, ownership changed, and suddenly the Dishman went X-rated.

At one point a couple years later, when I was in high school, a friend of mine and I rode our bicycles out to the Valley, insisted to the bemused ticket-seller that we were 18, and caught a matinee double-bill of “Deep Throat” and “The Devil in Miss Jones.” We sat there in shock. And then we giggled about it for weeks.

A previous poster was curious about the name. Obviously the theater took its name from its locale, the Dishman area, named for the family that was first to settle there. The big theater sign that spelled out the word “Dishman” was really a focal point for the community. Last I was in town, the building was still there, with the marquee intact. But the Dishman name had been replaced with neon-lit letters spelling the words Deja Vu — the name of the strip joint that at least at that point occupied the building.

Thank you for posting. It is still a strip club. I posted one exterior photo provided by Deja Vu Showgirls from their Yelp page, which has interior photos.

Their website also has interior photos. Copy & paste to view.