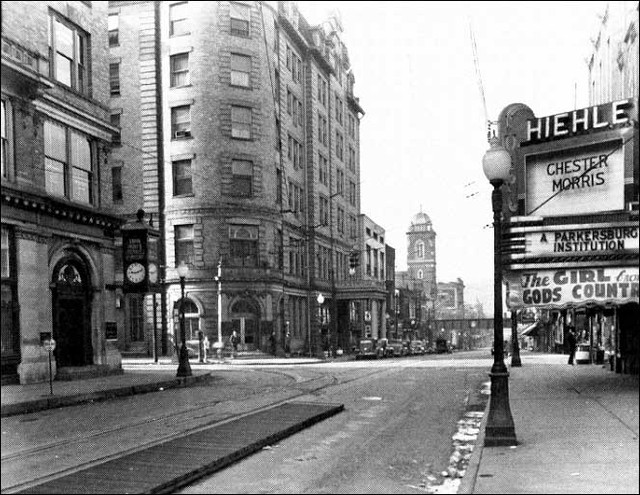 I worked at the radio station that occupied this building in the 1980’s (WIBZ 99.3 and WADC 1050) and when WIBZ was album-rock and we needed a bath-room break, we’d berak out the “Freebird” or “Stairway to Heaven” or “Won’t Geet Fooled Again” or Pink Floyd (Umma Gumma) and we’d be cool – because the studios are all the way at the back on the ground floor and the bath-rooms are upstairs and all the way to the front, up the winding stone step staircase. Certainly it feels like a theater and the marquee was still there in 1984, although more subdued and not as ostentatious as the 1940’s photo. I looked for the telltale signs of the theater, and other than the sheer space and the architecture, it looks like much was either taken out or covered up. Rumor has it that the caretaker of the theater (or projectionist) could be seen sometimes walking around (ghost) in his trademark red flannel shirt. An insurance company occupies the space now. For you history buffs, the theater is located next to the department of social services and it says “W.T. Grant” on the building and the sidewalk in front of the next-door neighbors. WIBZ is now a country station and WADC is now nostalgia and are owned by a conglomerate and located in one building with all their other properties.