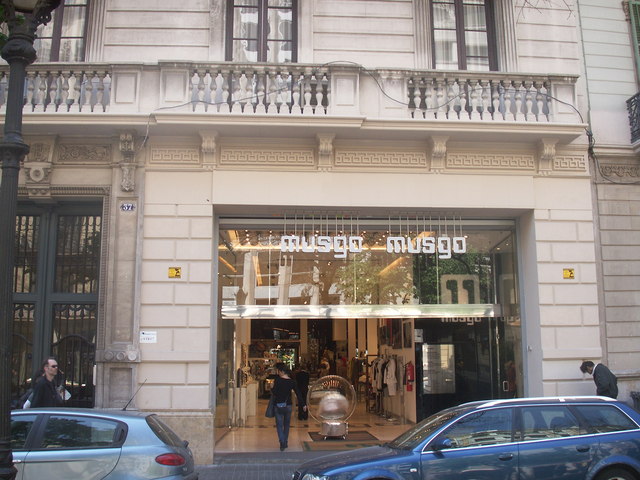 One of central Barcelona’s historic cinemas. Originally opened as the Pathe Cinema in May 1922. All seating was on a single floor in the rather long and narrow auditorium. It was a high class cinema and screened the latest films of the day, as in 1928 when Ramon Navarro in “Ben Hur” played an exclusive run. From 6th October 1929 it was re-named Cine Lido.

It was remodeled into an Art Deco style and re-opened as a newsreel cinema;Cine Actualidades on 1st April 1933. The Cine Actualidades was a project of Modern Exhibitions SA. The cinema was enlarged to a new seating capacity of 1,600 and re-opened on 16th September 1938 as the Cine Alcazar with two 1935 films; Spencer Tracy in “The Murder Man”(1935) and Jeanette MacDonald in “Naughty Marietta”.

From 1948 it was operated by the Balana group.

It underwent some renovations in April 1966 with new interior decoration by interior designers, Antoni Bonamusa and Tomas. It continued as a single screen, but with a much reduced seating capacity. Now equipped to play both 70mm and 35mm film, among the films to play at the Cine Alcazar at that time were; “The Man With the Golden Arm”, “My Fair Lady”, “Thoroughly Modern Millie” and Ingmar Bergman’s “La Vengenza”. It was also a popular cinema to screen Walt Disney films and Mexican films starring Cantinflas.

The lease came up for renewal in early January 2006 , but the Balana group didn’t take up the option to re-new. Sadly, it closed on 31st December 2005 and was converted into a clothing and gift store for the Moss chain, known as Musgo Musgo.

Some decorative details were alleged to have been retained, but I couldn’t see any on a site visit I made in April 2008. By 209 it was Casa de Llibre (House of Books)

THE INTERIOR DESIGNER IS ANTONI BONAMUSA I HOMS, DECEASED