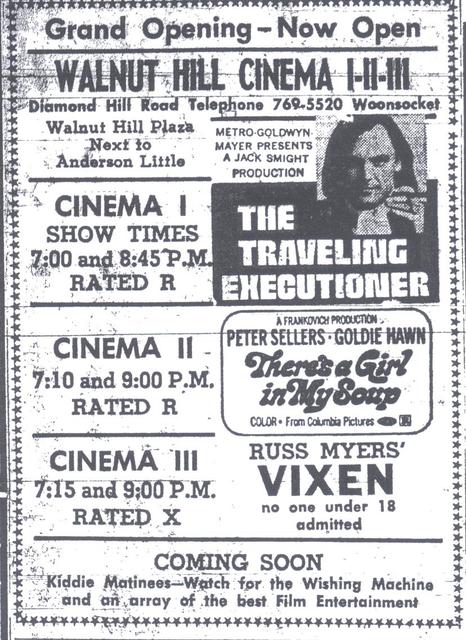 The Walnut Hill Cinemas opened on January 29, 1971 in the city’s Walnut Hill Plaza. According to a newspaper article, it was housed beneath the showrooms of the Anderson-Little Company. The cinemas lasted until the middle of the 1980s. The three auditoriums held a combined total of 700 patrons. Two years later, an additional screen was added when Cinema 4 was built, separate from this theatre and further up Diamond Hill Road. That is being given a separate listing.

General manager of the new cinema was Esther (Pandura) Stevens.

Opening night films on January 29, 1971 were The Traveling Executioner, There’s a Girl in My Soup, and Russ Meyers' Vixen. This last title was rated X but was not pornographic. Kiddie matinees were promised for upcoming bookings.

Two of the three auditoriums had 225 seats each. One had 250 seats.

The day this theatre opened, the Stadium Theatre, Woonsocket’s only other operating theatre, was showing Lovers and Other Strangers.

Cinema 4, built as a single-screen theatre in 1973 to supplement the Walnut Hill Cinemas 1-2-3 and located a short throw away at 2000 Diamond Hill Avenue can be found by clicking here. The Woonsocket Cinemas, built in the same general area of Diamond Hill Road in 1989, can be found here.

I saw Vincent Price in Theatre of Blood here in May, 1973.

I found this theatre in the Cinemette and Morgan American Management Corp listings in the 1975 IFA. They had dominated the Pittsburgh,PA region and this was their only theatre in the state.

After Cinema 1-2-3 closed, Sears took over the space. When the new Sears was built, in 1988, it didn’t have space for scratch-and-dent appliances, which had been successful in the old store. They rented the former cinema and moved the appliances down there. After Sears left, it became Mark Stevens.

The interior of the theatre had a lobby that ran parallel to Diamond Hill Road across the full width of the building, with a big, flat wall on the golf course side through which there were three auditorium entrances. I believe that you had to go up some stairs to get to the entrance to the aud that was furthest from Brunswick (#1?). I think the restrooms were at the Brunswick end of the lobby, Not positive, but I remember red carpet in the lobby and red pleated curtain covering the wall that separated the lobby from the auds.

I remember seeing Red Dawn there, which I think was the first PG-13 movie I ever saw. Was it the first movie to get that rating?

No, JEmidy, Indiana Jones and the Temple of Doom got the first PG 13 rating. It came out the weekend before memorial day in 1984.

“Indiana Jones And The Temple Of Doom” was rated PG. It was, however, the film (along with “Gremlins”) that influenced the creation of the PG-13 rating. “Red Dawn” and “Dreamscape” (released a week apart during August 1984) were the first PG-13 rated films.

I saw many films here. The first I can remember was a matinee of ESCAPE FROM THE PLANET OF THE APES in 1971. I subsequently saw NIGHT WATCH, ALL THE PRESIDENT’S MEN, ROCKY, THE BREAKFAST CLUB, ST. ELMO’S FIRE, AT THE EARTH’S CORE, SKYJACKED, THE POSEIDON ADVENTURE, THE WIZARD OF OZ, BATTLE FOR THE PLANET OF THE APES, BUTCH CASSIDY AND THE SUNDANCE KID, THE FOUR MUSKETEERS and many, many more.