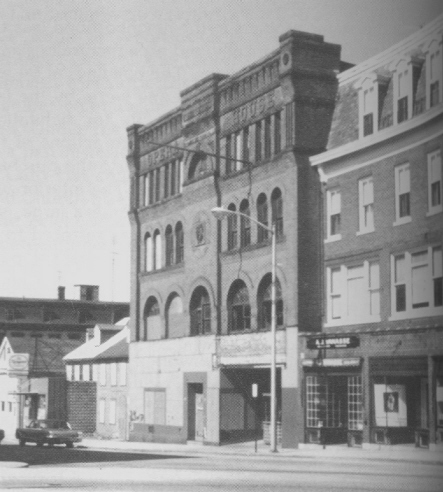 This Woonsocket landmark was formerly the Woonsocket Opera House, built in 1888, and offering touring theatrical productions. From 1913 it programmed vaudeville and films when it became known as the New Park Theatre. It closed in 1963 and has since been demolished. It was across Monument Square from the still-standing Stadium Theatre.

As a small child, my mother often when shopping or to have her hair done in the Monument Square area of Woonsocket. I remember staring at the Park with fascinating. It was closed and boarded up at the time (this would have been the late 1960’s or early 1970’s). I would walk around the ticket booth, and press my face against the doors trying to peer in through the slats of wood. My mother told me the Park had two balconies, but I could not picture what a balcony was. My aunt had worked there as an usherette. Shortly before the fire in 1975, I recall reading a newspaper article that some people had broken into the Park (apparently it was not too difficult to do that in the rear of the building), then, once inside, hammered through a wall to break into an adjacent store with the intentions of robery (I believe it was a jewelry store).

The theater was closed for a while in the early thirties, according to this lawsuit brought in 1937:
http://tinyurl.com/yad6yl

After the extensive refurbishing of the New Park Theatre; Arthur Darman re-opened it on Friday Nov. 6, 1942. The Vaudeville Bill featured “The Arnault Bros”, Cy Reeves",“Bob Easton”, “Grace Drysdale” and “The 3 Poms”. The new House Band was conducted by Stuart Allen, whose theme song was “Diane”. Every live performance began with The National Anthem" as an off-stage electric fan unfurled an American flag on stage right. The feature movie that weekend was “One Thrilling Night”.In competition, the Stadium was playing “A Yank At Eton”. “Flying Tigers” was at The Bijou. The Laurier ran “Hello Annapolis”, The Rialto “Dangerous Lady” and The Olympia featured “The Man Who Came To Dinner” The local paper had no Theatre Reviewer.

Thank you, thank you for all the photos and comments on the Park Theatre. My father used to dance there during the 40’s with Hilda’s dance studio. I had been searching for pictures. I had gone to the Historical Society on 10/07 hoping they had information but they didn’t. I was so happy to find your web site. My parents and grandparents are all from Woonsocket and my mom was an avid movie buff/goer growing up so I was so happy to find information/pictures on all these theatres that she has talked about for ages.
ghr October 8, 2007

As the Opera House, this theatre is listed under Woonsocket in the 1897-98 edition of the Julius Cahn Official Theatrical Guide. The Mgr. was G.C. Sweatt and the seating capacity was 1,716. The theatre had both gas and electric illumination; admission prices were 25 cents to $1. The auditorium was on the ground floor; the proscenium opening was 29 feet wide and the stage was 56 feet deep. There were 7 in the house orchestra. The 1897 population of Woonsocket was 25,000. Newspapers were the “Reporter” and the “Call”, both daily. Hotels for show folk were the Monument House, St. James, Hotel Woonsocket, and the Music Hall Hotel. Railroad was the New Haven Railroad. Also listed in this Guide under Woonsocket is the Music Hall. It had 1,400 seats, was on the second floor, and had a large stage 60 feet deep.

“The life breathed into the Stadium to rescue it from its X-rated days in the 1970’s is a spin-off of the interest in historical preservation and incubating the local arts scene stirred by the Woonsocket Opera House in its final years.

“The Opera House, a six-story giant that was one of New England’s finest which, in its posterity, will probably always lay claim to being the largest stage ever in the state, opened to rave reviews in 1888. Monument Square hotels and guest rooms were packed as 1,700 people crowded the 1,500-seat Opera House to see Maude Banks in "Ingomar the Barbarian.”

“In 1910, as road shows lost popularity to the "flickers,” boxing was tried. Three years later, as the Park Theatre, the typical bill combined three vaudeville acts with six film reels, but was short-lived because the Bijou was the dominant vaudeville house. By 1915, it was mostly all movies.

“What one later-day critic dubbed "a gaudy middle-aged fling in vaudeville” was attempted during World War II when the Stadium’s builder, industrialist Arthur I. Darman, made $25,000 in renovations and reopened the New Park Theater on Labor Day, 1942.

“It proved a money-loser, but a cultural boost for Woonsocket and a big hit with big-time performers. As with the Stadium, Darman designed meticulous facilities for the troupers. He arranged limousine rides from Providence’s Union Station and lavish post-show buffets. The favorable reputation was summed up in the title of a 1945 Saturday Evening Post article, "Book Me in Woonsocket.”

“The New Park’s ads proclaimed its "2-in-1 stage and screen shows… All for 40c and 50c plus tax… The Best Fun Investment” in town. But as the red ink mounted Darman sold out in 1945.

“DESPITE innovations such as a CinemaScope, screen movie audiences waned in the 50’s. By 1961, the Park’s twin horseshoe balconies only saw action on weekends and closed altogether in 1963, a "Watch for Reopening” sign presiding sadly over increasing vandalism and sporadic small fires. When the city took control in 1970 because of unpaid tax bills demolition bids were sought.

“A battle ensued in which preservationists and arts buffs tried to convince city fathers that grant money could be assembled to revive the Opera House. A state offer of $250,000 helped convince the city, but as the legal formalities were being ironed out, two weeks before the transfer to the Opera House Society the building mysteriously burned on September 22, 1975.”

This theatre was part of the September 1923 6th Paramount Week. In this advertisement from the (Providence) Evening Tribune, September 1, 1923, we see a fascinating list of Rhode Island area theatres, many long-gone and long-forgoten, or even unheard of, as well as what they were showing during that week. CLICK HERE

The Park Theatre was sued in 1928 by the Vitaphone Corporation.
NEWSPAPER STORY

The Theatre Historical Society archive has the MGM Theatre Report for the Park; it’s Card # 564. There is an exterior photo taken April 1941. The marquee displays Vaudeville on Sundays. The condition is Fair. It was over 15 years old and was not showing MGM films. The seating was 800 on the main floor and 400 balcony, total 1,200.