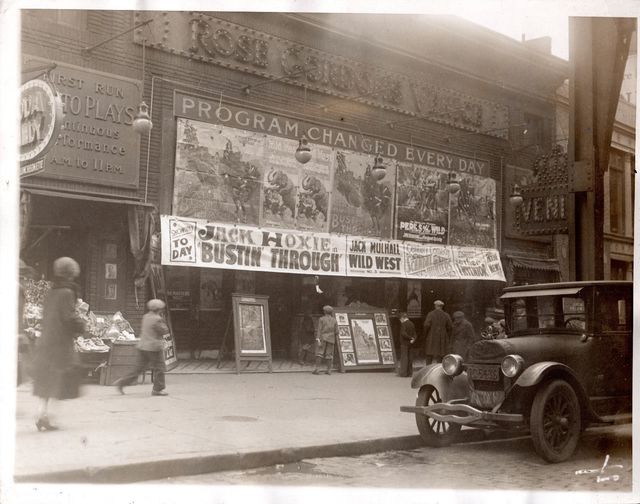 The Venice Motion Picture Theatre was in operation by 1914. By 1948, it had converted to Chinese programming.

The Venice Theatre is listed in the American Motion Picture Directory 1914 -1915. Various editions of Film Daily Yearbook give it a seating capacity of 600. In the 1950 edition of F.D.Y. seating is given as 650.

In 1940 Joseph Mitchell wrote a profile of the Venice’s co-owner/box office clerk, Mazie Gordon, for the New Yorker. It was reprinted in two collections of Mitchell’s work, McSorley’s Wonderful Saloon (1943) and Up in the Old Hotel (1992). According to Mitchell the theater was opened in an existing building in 1914 and named for a favorite restaurant of the original owner, a gambler and entrepreneur named Louis Gordon. In 1918 Gordon turned the theater over to his wife Rosie, who eventually shared ownership with her sisters. (Mazie was one of the sisters; she assumed Gordon’s last name for reasons she declined to reveal for publication.) In 1940 it was a ten-cent double-feature house, open from 8 a.m. to midnight, with a clientele of Bowery bums and tenement dwellers.

Mazie also owned a Merry-Go-Round in Coney Island in the 1940’s besides being part owner and frequent cashier at the Venice Theater.

There is a picture of the Venice here:
View link

Here’s a photo of the Venice:

Below novel “Saint Mazie” released in June 2015 is set in the Venice Theatre. Two links. 1st is NY Times Book review, the 2nd is a link to purchase. Book cover art in the 2nd link will enlarge.

Mazie in 1946. Identified as “Maise, Queen of the Bowery” on this page of post-WWII New York photographs, about halfway down.