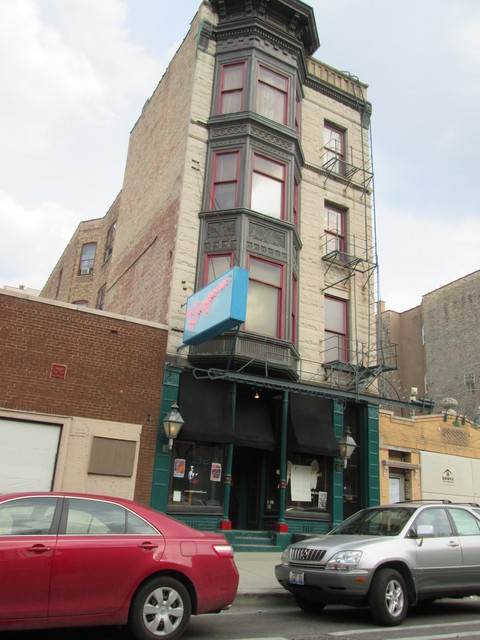 The Bijou Theatre was advertised as “The Oldest Theatre in the US showing the very finest in Gay Films since 1969”.

This theater has been around for quite a long time. In the 1960’s it would not be uncommon to stroll in here and see the likes of Nureyv and others from that era. In the 70’s it became quite raunchy as the clientele changed to a more “macho man” leather crowd. I am going to be honest here, about 97% of the guy’s never wore condoms and barebacking was the norm(with several partners.) The 80’s brought the big Aids scare and it became notorious as one of the places that Jeffrey Dahmer met one of his victims(who worked their.) The 90’s brought back go-go dancers and a mix of artistic shows geared towards the more flamboyant. The late 90’s brought financial trouble for their legendary owner, Steven Toushin. Last time I was in a guy actually died! To see the place with the lights on was scary to say the least.

The Bijou holds a place close in my heart. I was a mere 19 year old lad when I lost my virginity here.

When I worked at the Village, many men would come in asking where the Bijou was located. I’ve visited recently and find it an amazing gay time capsule. They certainly don’t make places like that anymore. I’d urge anyone interested in seeing the place to go there soon. I can’t imagine it remaining open for another decade…but then again it has lasted this long. The theater is very clean compared to most, and it is surprisingly bright and tiny. There is a stage up front. Gloryholes, slings, mazes or rooms, and a wooded back alley/garden are beyond the theater. It’s fascinating.

A few years back there was an art gallery further North on Wells St. that had an exhibit based on the owner of the Bijou. There were giant mugs shots from the `70’s in the gallery window.

There was also an apparent failed bombing in the early `90’s that I mentioned over on the Aardvark CT page.
According to news reports at the the time, the would be bomber accidentally blew himself up while alledgedly enroute to the Bijou. Though I’m not sure if this was ever proven to be true, or just speculation due to the bomber’s supposed criminal ties. Might have just been the media trying to link the theatre to other seedy activities.

I was always amazed that the Bijou stood the test of time, with a Chicago public grade school located essentially kitty corner & across the street. I’m sure if any such operation were to try and open from scratch at such a locale today, the surrounding yuppie parents would block it to no end. Real estate values in that area have gone ballistic.

It’s an incredible place to explore, and surprisingly the theater is very clean. If you ever have the time or money I would strongly suggest exploring it. I’ve never seen anything quite like it, and realize it probably won’t be around for much longer!

Appears to be closing as of September 30th 2015. Via the Old Town Facebook page. Copy & paste to view.

According to the below Chicago Tribune article (added to the gallery plus 2 more), it opened as the Bijou Theatre in July 1971 as a 77 seat screening room by Sean O'Conner, the former assistant manager of the Aardvark Theatre which had had a fire confirmed as 1971 as well. Richard Nixon’s 1952 “Checkers Speech” was the opening film.

I refuse to accept as true that there are no more adult cinemas in Chicago. You say?

I had so much fun at the Bijou back in my Navy days. I couldn’t wait to ride the Metra Line train service into downtown Chicago to enjoy myself at the Bijou. Memories….