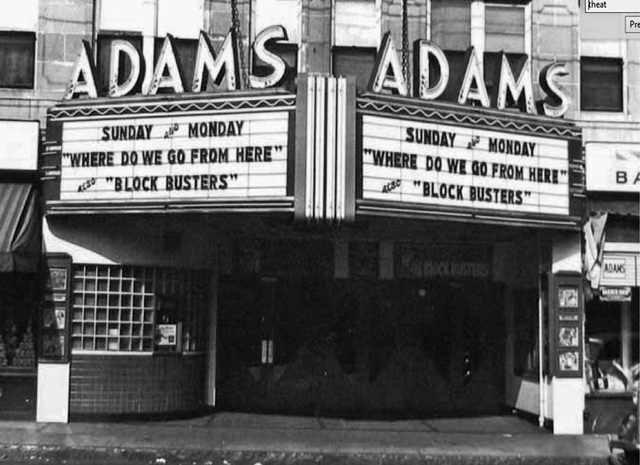 The Adams Theatre was located on School Street, diagonally across from the Firestone tire store, near the St. Johns church. The building is used for retail today.

Newsman Richard T. LeBrecque, writing in the Quincy Patriot Ledger of April 20, 1962, says that the Adams Theatre on School Street was located “in the old Arena”. I’m not sure what he meant by that—was there some sort of arena originally located in the rather small space of the Adams auditorium, or did he mean that the building containing the Adams Theatre was constructed on the site of an old arena ??

This is from Boxoffice magazine, May 1941, and may answer the question posted above:

QUINCY-Plans are afoot to remodel a skating rink on School Street into a theater.

It should be pointed out that the Adams was undoubtedly named for President John Adams and President John Quincy Adams whose side-by-side birthplaces are located only a 10 or 12 minute walk from the theater and are maintained by the National Park Service.

The inscription at the top of the theater says “Arthorp Building”.

I went there to the “flicks” from the mid-1940s until it closed and it was always the “Adams” Theatre. But the building which contained the entrance could have had another name, like “Arthorp”.

The Adams was not the first theater in Quincy to be constructed in a remodeled skating rink. In 1906, the Scenic Temple was built in the old Quincy Coliseum, a skating rink and dance hall on what is now Upland Road near Quincy Square. The Scenic Temple presented both early movies and live small-time vaudeville acts on stage.

In the Streetview photo above, the Adams was in the 2-story white building down the street, not in the brown-brick building nearest the camera. There was a marquee there; you walked in and then turned right to face the screen.

Here is an article about the Adams Theatre from Boxoffice of January 3, 1942. The conclusion of the article is several pages later, so here’s a direct link to it. The architect for the conversion of the skating rink into a theater was Roger G. Rand.

Thanks to whoever “unlocked” the Streetview photo above and moved it down to the correct location. The Adams entrance was either the area occupied by the East Coast Martial Arts, or the adjacent Low Overhead Discount store. Not sure exactly.