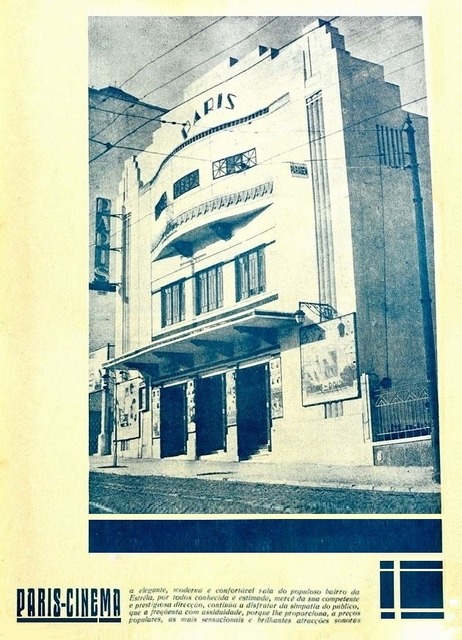 Cinema Paris, is standing between Lapa and Campo de Ourique, two of major central Lisbon residential areas. Cinema Paris dates from 1931, and was designed by architect Victor Manuel Carvalho Piloto, with internal decorations by Paulo Guilherme. During all those years before, Cinema Paris was one of the luxurious cinemas in town. Main attractions were its high ceiling, big screen, and some murals around the first balcony. Movies: adventures, comedies, action.

In late-1970’s, Cinema Paris was closed due to the proximity of Amoreiras Shopping Center, with several small rooms, cause the company which explored Cinema Paris was the same, they disinvested in Cinema Paris. During last 30 years Cinema Paris has been closed and nobody gave a damn. Many projects to demolished have been made, but in 2003, many people call the city mayor to stop the demolition (initiated some days before) and he stopped the process, expropriated and now the City of Lisbon owns Cinema Paris.

There is a project for a vocal center, related with one of Lisbon’s majors Coral (classic music, etc.), with movies also, as a complementary activities. We hope Cinema Paris will re-open in a short term. It still stood derelict in August 2018.