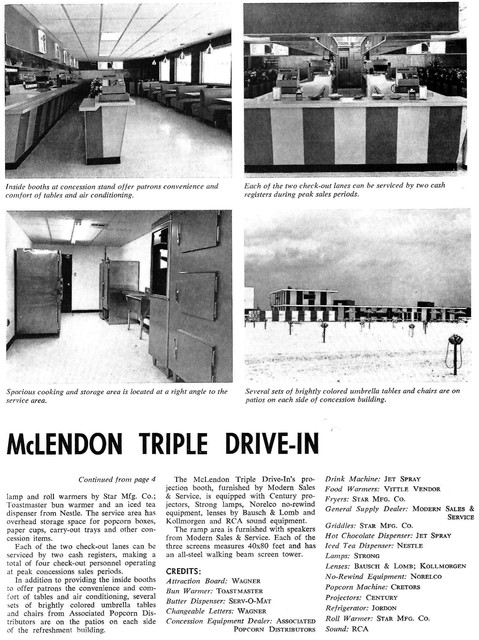 Opened on May 7, 1971 with George Peppard in “One More Train to Ride” & Charlton Heston in The Hawaiians". George Peppard appeared at the opening ‘in person’. With a total capacity for 3,100-cars, Screen 1 held 1,000-cars, Screen 2 held 950-cars and screen 3 held 1,170-cars. The centrally placed concession building also housed the projectors for all three theatres.

The owner, Gordon McClendon, owned a number of drive-ins in Texas. He also made several low budget horror films in the late 1950’s, most notably The Giant Gila Monster and The Killer Shrews. McClendon now is a Burger King franchisee.

Located at the intersection of S. Main and Hiram Clark in SSW Houston. Opened in 1970 but not sure when it was closed, probably in the mid 80’s. For several years, the site was used as an outdoor flea market. The 3 screens were demolished, however the concession stand remained as an office bldg for the flea market. The site is now the “Lake View RV Resort” with a small lake where the concession stand once stood.

The McLendon Triple’s grand opening was at 8:00 p.m. on May 7, 1971. George Peppard participated in the grand opening ceremonies. The Drive-in was slated to be named the McLendon Astro, but the Houston Sports Association filed an injunction citing trademark infringement. The premier features were â€œBig Doll Houseâ€ (Screen 1), â€œHorror Houseâ€ (Screen 2), and George Peppardâ€™s film â€œOne More Train to Robâ€ (Screen 3).

This drive-in claimed to be the world’s largest in its grand opening ad, which can be seen on May 7th, 1971